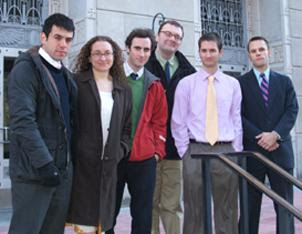 The Supreme Court announced today that it will not review the case of the SHAC 7, a landmark First Amendment case in which a group of animal rights activists were convicted as “terrorists” for running a controversial website.

The campaign of the SHAC 7 didn’t involve anthrax, pipe bombs, or a plot to hijack an airplane. They ran a website. On that website, they posted news about the campaign — legal actions like protests and illegal actions like stealing animals from labs — and unabashedly supported all of it.

For this they faced a slew of conspiracy charges, including conspiracy to violate the Animal Enterprise Protection Act and commit “animal enterprise terrorism.”

The defendants lost at the trial level, and were sentenced to between one and six years in prison. Upon appeal, the Third Circuit issued a sweeping ruling. It held that SHAC’s fiery rhetoric constituted a “true threat” (even though they were never accused of destroying property, or violence, or inciting such activity) because illegal conduct has taken place in the same campaign.

To put it another way, the court held that the First Amendment rights of a group of people could be restricted based on the past actions of others.

For instance, one of the defendants, Josh Harper, gave two speeches in which he talked about the campaign, and also his personal, theoretical support for the Animal Liberation Front and “black faxing.” The appellate court noted:

Harper’s personal conduct does not cross the line of illegality; to punish him simply on the basis of his political speeches would run afoul of the constitution. However, his conduct… does provide circumstantial evidence from which a jury could have reasonably inferred that Harper was involved in a conspiracy to violate the AEPA.

The Supreme Court has denied writ of certiorari in the case, which means the case will not be heard. In short, the appeals court ruling stands, and this is the end of the line for the SHAC 7.

The chances of a case being heard by the Supreme Court are incredibly slim, of course. But I’m a bit surprised the court will not hear the SHAC 7 case. The Supreme Court recently ruled that Westboro Baptist Church (the “God Hates Fags” folks) have the right to protest military funerals. Chief Justice John G. Roberts Jr. wrote that their conduct “is certainly hurtful and its contribution to public discourse may be negligible,” but it is protected, nonetheless.

All but one of the SHAC 7 defendants have been released from prison, so this ruling was not about prison time. It was about the precedent that this type of ruling may set, particularly in the context of the Animal Enterprise Terrorism Act. And it was about whether that label, “terrorist,” should follow these activists for the rest of their lives.

Even if you do not agree with the SHAC campaign, or animal rights campaigns in general, the Supreme Court’s refusal to hear this case has chilling implications for all activists of all social justice movements.

UPDATE: Here’s a response from Lauren Gazzola, one of the SHAC 7:

“Today has been a hard day, because I think that the Supreme Court’s denial of our cert. petition was wrong. Not just legally wrong, but morally wrong. In that sense, I’ve had many hard days over the past several years. Right now though, I’d like to tell you about one of the easiest.

A few weeks ago I gave a talk about the SHAC 7 case to a law school class. Before I got up to speak, the professor showed undercover footage from inside of HLS. It was the first time I’d seen it since getting out of prison and I broke down. When it ended, the Executive Director of the National Antivivisection Society got up to introduce me. “It’s hard to know where to start,” she began.

I was next up and still slightly shaky from having seen the footage. I had planned to begin by thanking the professor for inviting me,
thanking NAVS for sponsoring the event, and thanking the students for attending. Instead I told the class, “I know exactly where to start.