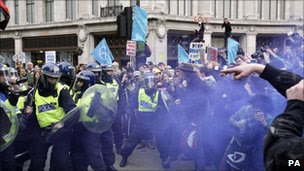 More than 250,000 people have attended a march and rally in central London
against public spending cuts.

But small groups attacked shops and banks with a stand-off in Piccadilly.
There have been 214 arrests and 66 people injured, including 13 police.

Ministers say the cuts are necessary to get the public finances in order.

In the largest public protest since the Iraq war rally in 2003, marchers
from across the UK set off from Victoria Embankment to Hyde Park, where
TUC general secretary Brendan Barber was first in a line of speakers.

"We are here to send a message to the government that we are strong and
united," he said.

"We will fight the savage cuts and we will not let them destroy peoples'
services, jobs and lives."

The police are being careful to communicate with people on the ground
using social media, knowing many are young. One update is that there are
no kettles so far.

Protesters are very worried they will get caught within police cordons -
so there is a bit of a game of cat and mouse.

Lots of these protests are very fast-moving. We walk miles with these
protesters as they try to keep out of police cordons.

We saw some scuffles with police. Watching all the time are shoppers -
this is Saturday afternoon. It is not a violent atmosphere, but it's
certainly a lively atmosphere.

Mr Barber was followed by Mr Miliband, who said: "The Tories said I should
not come and speak today. But I am proud to stand with you. There is an
alternative."

The march began at 1200 GMT and it took more than four hours for the
protesters to file past the Houses of Parliament on their way to the park.

The TUC, which organised the event, said more than 250,000 people had
taken part, and the Metropolitan Police confirmed the numbers.

BBC political reporter Brian Wheeler, in central London, said there were
lots of families and older people, and the atmosphere was good-natured but
the anger was real.

"The noise in Whitehall was deafening as thousands of protesters banged
drums, blew whistles and shouted anti-cut slogans, slowly making their way
towards Trafalgar Square.

"The crowds were booing as they went past Number 10, but the demonstration
was good-natured and friendly.

"There are hundreds of trade union banners, but we have also spoken to
public sector workers who have come to make their voices heard."

One of those protesting was Peter Keats, 54, from Lowestoft, Suffolk, who
works for Jobcentre Plus.
Marchers in Whitehall Organisers estimated at least 250,000 people attended

He said: "Personally, I think it's wrong the way we are hitting the poor.

Demonstrator Christine Nugent, a university research fellow, said: "The
size and scale of it, and the range of people here, is great."

The veteran of anti-Margaret Thatcher demonstrations in the 1980s said
protesters came from all walks of life, adding: "There are a lot of trade
unionists here, but it's not just the usual suspects."

There have been separate incidents involving a number of protesters, some
with their faces covered by scarves, away from the main march:

* A sit-in organised by the campaign group UK Uncut took place at
Fortnum & Mason department store in Piccadilly. The group has
previously mounted protests against tax avoidance measures by big
businesses
* A bonfire was lit by protesters at Oxford Circus, where earlier
police said light bulbs containing ammonia were thrown at officers
* Topshop on Oxford Street had its windows smashed and was doused with
paint

* Missiles were thrown at the Ritz Hotel, Piccadilly

* Bank branches including the Royal Bank of Scotland were attacked
with paint and had windows broken, while branches of HSBC and
Santander were broken into.

Commander Bob Broadhurst said: "The main TUC march has been going well. We
have had more than a quarter of a million people with hardly any problems.

"Unfortunately we have had a group of approximately 500 criminals
committing some disorder including throwing paint at Topshop in Oxford
Street and at the police, and scaring the public who are trying to shop."

Policing minister Nick Herbert said the government was "committed to
supporting peaceful protest" and blamed the violence on "a small minority
of individuals".
Police and protesters in Piccadilly A stand-off between police and
splinter groups took place in Piccadilly

Mr Miliband condemned the violence, saying: "There is no excuse for it. It
is unlawful and wrong."

Civil rights group Liberty said the march had been "infiltrated by violent
elements" who attacked buildings before "melting into the demonstration
once more".

Earlier, the largest union involved, Unite, said so many of its members
had wanted to take part that it could not find enough coaches or trains to
ferry them to London.

Its general secretary Len McCluskey said the scale of the deficit had been
exaggerated.

Outlining his economic plan to the BBC, he said: "Our alternative is to
concentrate on economic growth through tax fairness so, for example, if
the government was brave enough, it would tackle the tax avoidance that
robs the British taxpayer of a minimum of £25bn a year."

Education Secretary Michael Gove said he could understand the disquiet and
anger.

"But the difficulty that we have as the government inheriting a terrible
economic mess is that we have to take steps to bring the public finances
back into balance," he said.

Mr Miliband is attending the march but is yet to sketch out an
alternative, he added.

Matthew Sinclair, director of the Taxpayers' Alliance which lobbies for
lower taxes and greater government efficiency, said: "It's understandable
that people feel upset...

"But in the end it's not valid and what politicians should be doing is not
encouraging this rally but saying look, you've got to be more realistic
about the options facing this country."

LONDON – More than 250,000 people took to London's streets to protest the
toughest spending cuts since World War II — one of the largest
demonstrations since the Iraq war — as riot police clashed with a small
groups. More than 200 people were arrested.

Although most of Saturday's demonstration was peaceful, clashes continued
into the night as dozens of protesters pelted officers with bottles and
amonia-filled lightbulbs. Groups set several fires and smashed shop
windows near tourist landmarks such as Trafalgar Square.

"They shouldn't be taking money from public services. What have we done to
deserve this?" said Alison Foster, a 53-year-old school teacher. "Yes,
they are making vicious cuts. That's why I'm marching, to let them know
this is wrong."

Britain is facing 80 billion pounds ($130 billion) of public spending cuts
from Prime Minister David Cameron's coalition government as it struggles
to slash the country's deficit. The government has already raised sales
tax, but Britons are bracing for big cuts to public spending that are
expected next month.

Treasury chief George Osborne has staked the government's future on tough
economic remedies after Britain spent billions bailing out banks. Some
half a million public sector jobs will likely be lost, about 18 billion
($28.5 billion) axed from welfare payments and the pension age raised to
66 by 2020.

Commander Bob Broadhurst of the Metropolitan Police confirmed more than
250,000 people had marched peacefully, but said around 500 caused trouble.

Hundreds were arrested and police expected that number to rise. Dozens
were injured, and several were admitted to hospitals for a range of
problems, including shortness of breath and broken bones. Five police
officers were also injured.

The demonstration began in the afternoon. Police said one small group of
protesters broke away from the main march, scuffling with police officers
and attempting to smash windows on two of London's main shopping streets.
Others threw objects at the posh Ritz Hotel in nearby Piccadilly.

The protesters, shouting "Welfare not Warfare!" outnumbered the police.
Some attacked police officers with large pieces of wood. A handful of bank
branches were damaged when groups threw paint and flares at buildings.

Still, the day's protest otherwise had a carnival feel with music, big
screen TVs and performers in Hyde Park, one of London's biggest public
gardens.

The TUC, the main umbrella body for British unions, says it believes the
cuts will threaten the country's economic recovery, and has urged the
government to create new taxes for banks and to close loopholes that allow
some companies to pay less tax.

"I don't think the activities of a few hundred people should take the
focus away from the hundreds of thousands of people who have sent a
powerful message to the government today," he said. "Ministers should now
seriously reconsider their whole strategy after today's demonstration.
This has been Middle Britain speaking."

Ed Miliband, leader of the opposition Labour Party, likened the march to
the suffragette movement in Britain and the civil rights movement in
America. "Our causes may be different but we come together to realize our
voice."