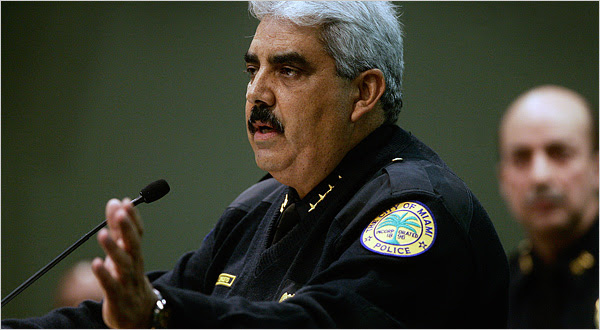 MIAMI — The video, shot with a hand-held camera, shows brawny Miami police officers breaking down doors and hauling handcuffed African-American suspects off some of the city’s toughest streets. “We hunt,” one officer says in the five-and-a-half-minute clip. “I like to hunt.”

Sheila McNeil, whose son was killed in a police shooting, at a City Hall protest this month.

But it was not a source of embarrassment for Miami’s police chief, Miguel A. Exposito. The video was part of a reality television pilot, “Miami’s Finest SOS,” a project with the enthusiastic backing of Chief Exposito. “Our guys were proactively going out there, like predators,” he says during his cameo in the video, which surfaced online in January.

A few weeks later, a Miami police officer shot and killed a black man during a traffic stop at North Miami Avenue and 75th Street in the Little Haiti neighborhood. The man, Travis McNeil, 28, was unarmed and never left the driver’s seat of his rental car when he was shot once in the chest, members of his family said.

Mr. McNeil was the seventh African-American man to be shot and killed by Miami police officers in eight months. The shootings in this racially polarized city have led to marches on the Police Department’s headquarters and calls for a Justice Department investigation, and the city manager has initiated an investigation into the chief’s record.

After pushing for action for weeks, the families of the seven shooting victims will speak at a City Commission meeting on Thursday. Some families are demanding that Chief Exposito be dismissed.

“I don’t understand how the powers that be can allow these things to keep happening,” Sheila McNeil, the mother of Mr. McNeil, said of the Feb. 10 shooting death of her son. “Something is drastically wrong.”

Chief Exposito, a burly 37-year veteran who became chief in November 2009, defended his leadership. “We don’t have a violent police department,” he said in an interview last week. “You’ll find our officers are very compassionate with the people they deal with. They will try to de-escalate situations rather than resorting to deadly force.”

The officer who shot Mr. McNeil is Reinaldo Goyo, a member of the city’s elite gang unit who appeared in the “Miami’s Finest SOS” video. (The TV show has since been shelved.)

Saying on the video: “I’ve got some style. I’ve got some flavor” while wearing a hoodie emblazoned with the words “The Punisher,” Detective Goyo says he and his partner inherited the nicknames Crockett and Tubbs after the lead characters in the 1980s TV show “Miami Vice.” “It’s got a nice little ring to it,” he says.

Chief Exposito said he thought the video was “excellent,” although in an e-mail to the production company in December, he acknowledged that he regretted using the word “predator” and asked that his quotation be changed. In another e-mail to one of his assistants, he wrote: “This statement would add fuel to the fire. They need to soften it!”

The chief also defended the officer who said, “I like to hunt.”

“Hunting doesn’t mean you go kill people,” the chief said. “Hunting means you go out there and capture people.”

Miami has a long history of racially charged police shootings, some of which combusted into deadly riots and Justice Department inquiries that ended with police officers in prison. The pattern this time is familiar: All seven men who were fatally shot by the police were African-American; the police officers who shot them are all Hispanic.

“There is a wide range of growing concern in the community regarding the apparent lack of communication and response to these incidents by the City of Miami Police Department,” Representative Frederica S. Wilson, a Democrat from Miami, wrote in a recent letter to Attorney General Eric H. Holder Jr., asking the Justice Department to investigate.

Questions about Chief Exposito’s leadership have galvanized some leaders of the African-American community, who say that two of the men shot by the police were unarmed. Police officials would not describe details, but they have said that during both shootings, the officers had reason to believe their lives were in danger.
Enlarge This Image

Family members carried pictures of Gibson Belizaire, who died in a police shooting in August, during a protest at Miami City Hall.

Community leaders also expressed outrage that a 12-year veteran of the city’s gang unit, Ricardo Martinez, shot and killed two men within nine days last August. Officer Martinez returned to his job six days after fatally shooting one man, then shot and killed another three days later. Before the shootings, he was under investigation for allegedly selling seized phones.

One officer being responsible for two fatal shootings in such a short period of time is highly unusual, national experts on police forces say. Typically, officers are assigned to desk duty after a shooting pending an inquiry.

“What does that tell you about the chief’s judgment?” said the Rev. Anthony Tate, president of the civil rights organization Pulse and pastor of New Resurrection Community Church in the Liberty City neighborhood.

Chief Exposito said that the inquiry had been initiated by his department, and that it would have been inappropriate to keep Officer Martinez off the street because of an allegation of wrongdoing. In December, Officer Martinez was charged with selling stolen Bluetooth phone headsets. He has been dismissed.

Mr. Tate, two Miami city commissioners and other community leaders have repeatedly called for the chief’s dismissal. Chief Exposito was a major in the property room and in charge of a compliance task force before being elevated two years ago to police chief by Mayor Tomas P. Regalado. Since then, the chief and the mayor have feuded bitterly over a variety of issues.

City Commissioner Richard P. Dunn II was the first on the commission to call for the chief’s dismissal. “It’s not personal. He’s just not competent to be a chief, that’s all,” said Mr. Dunn, whose district includes the neighborhoods where all seven fatal shootings occurred.

“These shootings have us sitting on a time bomb,” he said. “Everyone wonders: When is the next one going to happen? And the fact the chief is still here just makes Miami look like a banana republic.”

Chief Exposito said that after the first of the fatal shootings, last July, he invited the F.B.I. to attend the department’s internal inquiry, a gesture his predecessors had not offered, he said. “This is not something I was forced to do,” he said.

The chief’s critics say his leadership is markedly different from that of his predecessor, John F. Timoney, a deputy police commissioner in New York in the Giuliani administration.

During Mr. Timoney’s seven-year tenure, the department once went 22 months without having a police officer fire a weapon. When Mr. Exposito succeeded Mr. Timoney in November 2009, he assigned more than 100 officers to “tactical units” to try to curb violent crime.

The tactical units, including the gang unit whose officers have been responsible for the majority of the most recent shootings, have arrested hundreds of suspects and removed 400 more guns from the street in 2010 than in 2009, the chief said.

During those sweeps, “seven people decided they were not going to obey the law and not adhere to the police orders,” said Armando Aguilar, president of the Fraternal Order of Police, the police union, “and they ended up getting shot.”

Mr. Philip, who headed the F.B.I.’s Miami field office, said in an interview that he compared the number of police shootings in 2009, the last year of Mr. Timoney’s leadership, with the first 15 months of Chief Exposito’s tenure. During Mr. Timoney’s final year as chief, seven officers shot at suspects, killing four and missing three others. Under Chief Exposito, there have been 10 shootings, with seven fatalities.

“It seemed to be a concern that the department was engaged in an accelerated rate of shootings, but there doesn’t appear to be,” Mr. Philip said. “The data seems to support the chief.”

Mr. Philip said his review did not include interviewing police officers who fired their weapons, witnesses or the family members of victims. Determining whether each of the shootings was justified is the state attorney’s job.

The chief said he was gratified that “someone with the stature of Paul Philip is agreeing with me.” He added: “I’ve been saying all along, we’re trying to get violent crime under control in that community. Unfortunately when you do that, you will be confronted by people who are armed and dangerous.”

Community leaders said they were upset about the pace of the Police Department’s own inquiries. They complained that police investigators had not taken a statement from Kareem Williams, 31, who is Mr. McNeil’s cousin and was shot three times as he sat with Mr. McNeil in the rental car last month. Mr. Williams, who left the hospital two days later, told his family that the officer began shooting without saying a single word, Mrs. McNeil said.

Not long ago, Mrs. McNeil met with Chief Exposito, who spoke about police procedures on the use of deadly force, she said. She added that the “impersonal” nature of the discussion had left her frustrated and sad.

“When your son has been shot,” she said, “you don’t want to hear about policies.”