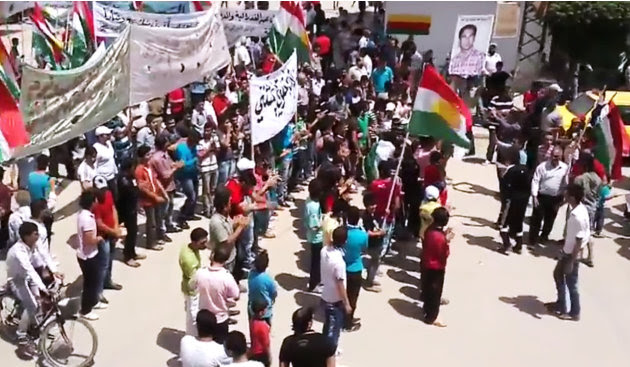 BEIRUT  — Syrian forces fired on thousands of protesters Friday in
Aleppo, killing a teenager, after a raid on dormitories at the city's main
university killed four students and enflamed tensions in a key bastion of
support for the regime.

An Aleppo-based activist said the protests were the largest the city has
seen since the start of the uprising against President Bashar Assad in
March 2011. Aleppo is a major economic hub that has remained largely loyal
to Assad over the course of the 14-month uprising.

"The people are incensed by what happened at the university," said the
activist, Mohammed Saeed. "Everyone wants to express solidarity with those
students."

"With our blood, we sacrifice for you students!" people shouted.

Although Aleppo has largely been spared widespread violence,
anti-government protests have been on the rise. In recent weeks,
university students — many from rebellious areas such as the northern
Idlib province — have been staging almost daily demonstrations.

"This is what prompted this extremely brutal attack by the government ...
this is proof that the regime has started to worry about Aleppo rising
up," said Omar Idilbi, a member of the Syrian National Council opposition
group.

During Friday's protests, security forces killed a 16-year-old youth in
the Salaheddine district of Aleppo and wounded around 30 other people,
Saeed said. Scores also were arrested, he said. The British-based Syrian
Observatory for Human Rights, which relies on a network of activists on
the ground in Syria, confirmed that a teenager was gunned down.

Amateur videos showed a large number of people shouting "Allahu akbar," or
"God is great," as a protester climbed an electricity pole in Salaheddine
to hang a flag that the opposition has adopted as its own — the national
flag that dates to before the ruling Baath party took over.

Other videos showed protesters shouting: "Death rather than humiliation!"

In the Damascus district of Kfar Souseh, regime forces opened fire Friday
on hundreds of mourners during a funeral procession, forcing people to
flee in panic as bullets whizzed overhead, said a witness who spoke on
condition of anonymity for fear of reprisals.

The witness said she took cover under a tree in a backyard when she saw a
sniper shoot a man in his 20s as he tried flee the shooting. She said she
saw the bodies of three people killed by army gunfire.

The violence has further highlighted doubts over a peace plan brokered by
international envoy Kofi Annan nearly a month ago.

A spokesman for Annan said Friday the international envoy believes his
peace plan for Syrian remains "on track" — a day after the Obama
administration offered a far bleaker view, saying the plan might be
doomed.

A U.N. team of up to 300 members is to monitor compliance with a truce.
U.N. peacekeeping chief Herve Ladsous said about 40 U.N. observers are on
the ground in Syria and that the force will grow to 65 by Sunday.

Joshua Landis, director of the University of Oklahoma's Center for Middle
East Studies, said the protests in Aleppo could mark a shift in the
conflict.

"University students are Syria's future. They are the youth of Syria's
middle class and elite families — the ones who are supposed to be
sympathetic to the regime and leery of chaos and revolution," Landis said.

Aleppo University announced it was closing until final exams on May 13.

Thousands of Syrians also protested in the central provinces of Hama and
Homs, in the southern province of Daraa and in suburbs of the capital
Damascus. Activists reported at least 29 people killed across the country
in what is becoming an all-too common toll as the country grinds toward
civil war.

Friday is the main day of anti-government protests.

Also Friday, an Amnesty International researcher said she found evidence
that Syrian troops are systematically burning down homes and executing
detainees in apparent attempt to terrorize people and deter them from
protesting.

Rovera said she collected testimony detailing 30 extrajudicial killings,
including several in the city of Idlib on April 16, four days after a
U.N.-brokered cease-fire was to have taken hold.

One man told her that soldiers took his son from their home on that day.
The man said he later looked out the window and saw soldiers shoot eight
young men, their hands bound, as they faced a wall. The man told Rovera he
did not know whether his son was in that group, but that his body was
found later, along with others, in a nearby school.

In the town of Sarmin in Idlib province, a woman said soldiers seized her
three adult sons from their home, rousing them from their sleep on March
23. The woman told Rovera that soldiers blocked her from following her
sons outside.

"When I was able to go outside, after a couple of hours, I found my boys
burning in the street," Rovera quoted the woman as saying. "They had been
piled on top of each other and had motorbikes piled on top of them and set
on fire. I could not approach their bodies until evening because there was
so much shooting."