But there was no explosion, no bridge collapse, and by Tuesday afternoon, the five men were in shackles and leg irons, appearing in U.S. District Court on federal terrorism charges that reference possible attacks on other landmarks, including Cleveland’s Federal Reserve Bank.

At a news conference, U.S. Attorney Steven Dettelbach identified the men as members of a radical fringe of the Occupy Cleveland group, a national movement formed to protest corporate greed and home foreclosures.

Dettelbach said all evidence points to the five suspects acting alone, without the sanction of other mostly non-violent Occupy members.

“Let me be clear, the FBI and Department of Justice are not conducting an investigation of any specific group,” he said. “We do not investigate movements or groups, we investigate individuals.”
Here is how Dettelbach and the FBI say they foiled the plot.

For nearly seven months, a confidential informant who had penetrated the group’s inner circle, secretly recorded meetings in which they plotted mayhem against symbols of corporate America in greater Cleveland. The unidentified informant reported back to the FBI.

Douglas Wright, 26, of Indianapolis, took the lead from the start, according to a 21-page affidavit filed by the lead FBI agent on the case. The suspects started by thinking small, with plans to topple the signs of banks from atop downtown Cleveland skyscrapers. The plot included a diversionary tactic of smoke bombs exploded on the Veterans Memorial Bridge.

Wright, alias Cyco, and the confidential informant were later joined by Brandon Baxter, 20, of Lakewood, Anthony Hayne, 35, of Cleveland, Joshua Stafford, 23, of Cleveland, and Connor Stevens, 20, of Berea. They attended Occupy Cleveland protests in attempts to recruit like-minded anarchists, but were unsuccessful, according to the affidavit.

Their plots were willy-nilly, ranging from schemes to blow up the Cuyahoga County Justice Center, the Federal Reserve Bank of Cleveland, the I-480 bridge in Valley View, and a cargo ship before settling on the Ohio 82 bridge, according to federal documents. (See the DocumentCloud viewer below to read the documents in their entirety.)

Other potential targets included the abandoned streetcar tunnels beneath downtown Cleveland, a Cuyahoga County Homeland Security operation called the Northeast Ohio Regional Fusion Center, an unidentified Ku Klux Klan location in Ohio, and the new Horseshoe Casino on Public Square.
But all were eventually discounted for a variety of reasons.

The gang’s bible, officials said, was the “Anarchist Cookbook,” a 1970 how-to book on building bombs using household items and dealing with police during riots. They also devised ways to cover their tracks electronically, and obtained computer programs they hoped would destroy their trail of Internet searches.

On March 22, the confidential informant met with Wright at an unidentified location.
“Tell me what all we need to make the bombs so that we can start gathering -” the informant is quoted in the affidavit as saying.
“Mainly bleach,” Wright replied.
“Bleach?” the informant said.
“You can make plastic explosives with bleach.” 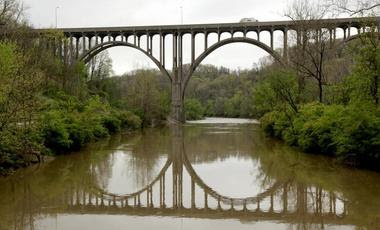 Enlarge Marvin Fong, The Plain Dealer View of the Ohio 82 bridge that links Brecksville and Sagamore Hills, photographed, Monday, May 1, 2012. The bridge is reflected by the Cuyahoga river. Five men were arrested for plotting to blow up this bridge. (Marvin Fong /The Plain Dealer) Bridge Bomb Plot gallery (3 photos)

Six days later, while driving across the I-480 bridge, Baxter asked, “How much do we need to take out a bridge?”

Rather than make their own bombs, the group eventually opted to buy C-4, a plastic explosive, plus bullet-proof vests and gas masks, for $800. What they didn’t realize was that the seller was an undercover FBI agent and the two bombs were fakes - inert devices constructed to look like the real thing, with wires, switches, and detonators that could be triggered by a call from a cell phone.
“The defendants went to the bridge last night,” Dettelbach said at a Tuesday morning news conference. “The defendants planted the explosives at the base of a busy bridge. The defendants went to an off site location to arm the explosives, and the defendants then entered a code they thought would blow that bridge up.”

Dettelbach said the arrests show the evolving nature of terrorism the FBI is confronted with today.
“This case demonstrates that the threat we face is a diverse one,” he said. “That terrorism can come in many hues and from many homelands.”

At their court appearances, the suspects spoke in one- or two-word answers.

U.S. Magistrate Greg White found them all indigent and appointed them lawyers. They will be held without bond until at least Monday.

“Love you, Connor," shouted James Stevens, father of suspect Connor Stevens, as federal marshals led the group away. Stevens' sister cried in the back of the courtroom.

Debbie Kline, of Cleveland’s Jobs with Justice, coordinated with the Occupy Cleveland on a number of protests and community actions. On Tuesday, she called the involvement of the five bombing suspects as “fringey”

Baxter, she said, had recently attended a training session on non-violent action. Kline said he seemed young and could have been impressionable.

“I wonder who else was pulling the strings of those in the group,” she said.