Stop the Wall: Support for the Hunger Strikers across Palestine

Stop the Wall reported on the ongoing massive solidarity inside Palestine and throughout Palestine for the hunger strikers, including mass demonstrations in all major cities. A day of action is scheduled for this Thursday, May 17, the one month anniversary of the launch of the mass open hunger strike, and a protest in Ramallah at Ofer Prison on Tuesday, May 15 as a Nakba commemoration/prisoner solidarity action: 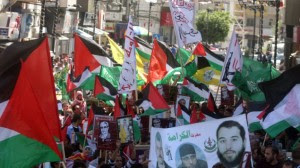 Every day the support for the Palestinian hunger strikers in Israeli jails spreads, creating national unity in solidarity with their protest. As groups across Palestine show their support, it becomes more apparent how pivotal this strike is in terms of the wider struggle – it is becoming a rallying point, a symbol of national cohesion reminiscent of the Intifadas. Despite internal disputes, unity is being displayed by Palestinians across the country in the face of Israeli occupation and repression of all shows of support of the prisoners. Momentum is building on the back of the “War of Empty Stomachs”, a war being raged to gain the recognition of rights guaranteed by International Law, but denied by the Israeli occupier.


Yesterday, more than 2000 Palestinian prisoners entered their 24th day of hunger strike, with Thaer Halahla and Bilal Diab now the longest ever hunger strikers on 74 days, while 6 other prisoners have refused food for in excess of 50 and 60 days. These 8 prisoners are now at serious risk of death, starving for their right to live.

Demonstrations took place yesterday across the West Bank, under the slogan “Friday Anger: Victory for the Prisoners”, and were met with violent suppression by the Israeli Occupying Forces (IOF). Tear gas, rubber coated bullets, flash-bang grenades and foul smelling water mixed with harmful chemicals, were used to disperse protesters, showing their solidarity with their brothers and sisters in the prisons.

At the demonstration in the village of Aboud, Ramallah District, a young protestor, Majid Salah al-Barghouti (18), after having been shot in the eye had to be evacuated to hospital where his condition was described as serious.

In the town of Beit Ummar, Hebron District, the IOF had taken to the roofs in anticipation of the weekly demonstration after Friday prayers, from whence they proceeded to bombard the crowd. Khaldun Jameel Masharqa (20) was hit in the chest with a smoke bomb, and Hammad Ahmed Abu Maria (21) was hit in the hand by another. This was followed by the closure of the entrances of the town, preventing all from passing.

In Hebron thousands gathered to march the streets, ending up at a tent in the city center set up to demonstrate solidarity with the prisoners.

In Nablus there was a demonstration of around 3000 Palestinians condemning the silence of the International Community concerning the hunger strike.

At Ofer prison, a regular flashpoint with daily demonstrations, a dozen young men were shot with rubber coated bullets, with many others suffering temporary blindness and suffocation having been tear gassed.

In the areas occupied in 1948, more than 10,000 Palestinians participated in a festival of solidarity with the prisoners in the town of Kafr Kana, in the Galilee, holding up pictures of the prisoners and Palestinian flags and slogans demanding liberation of prisoners from Israeli jails. In Haifa, Palestinians closed their shops and displayed banners saying “The shops are closed because our prisoners are in danger.”

In Jerusalem, hundreds of Jerusalemites participated in a rally including prisoners’ families as well as actors and representatives of national institutions. The scene was filled with Palestinian flags, pro-prisoner and anti-occupation slogans amid tight security imposed by the occupation forces, with significant elements of the police, border guards and special units in attendance. The protestors took to the streets, rendezvousing with other activists before marching on the headquarters of the International Committee of the Red Cross.

Demonstrations have been taking place daily across the whole of the occupied territories in solidarity with the prisoners, and this trend is likely to continue as the struggle in the prisons goes on.