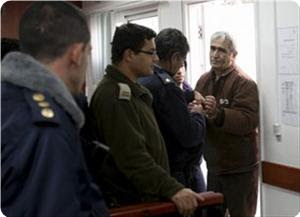 Ramon prison management transferred hunger striking Palestinian prisoner and leader, Ahmad Sa’adat to Ramle prison hospital on Sunday, April 29. Sa’adat is General Secretary of the Popular Front for the Liberation of Palestine, and has been in isolation for over three years in Ramon prison. He has been on hunger strike since April 17 with now over 2000 Palestinian prisoners.

PFLP prisoners were previously offered that Sa’adat’s isolation would be ended in exchange for them ending their hunger strike, which the prisoners refused, saying they are committed to achieving the full demands of the strike in unity with all prisoners, including ending all isolation, ending administrative detention, and supporting rights to family visits, education and media for prisoners.

Sa’adat has lost 6 kilograms so far on this hunger strike, which comes only short months after his last extended hunger strike, from September 27-October 20, calling for an end to isolation and solitary confinement. Hundreds of prisoners joined this strike, which ended with false Israeli promises to end isolation which were then ignored following the prisoner exchange. Sa’adat lost tens of kilograms during the previous strike.

Sa’adat was abducted in 2006 from the Palestinian Authority’s Jericho prison, where he had been held with five other prisoners, including four of his comrades under US and British guard since 2002. His imprisonment had been ruled illegal by the Palestinian High Court and he was elected to the Palestinian Legislative Council while held in Jericho. On March 16, 2006, Israeli occupation forces attacked the prison and abducted Sa’adat and his fellow prisoners. He is now one of 19 Palestinian prisoners in isolation.

The Popular Front for the Liberation of Palestine issued a statement in response to the news that Sa’adat has been transferred to the prison hospital, saying that the PFLP “holds the occupation government fully responsible for any consequences to the life of General Secretary Sa’adat and all of the heroic prisoners fighting the battle of open hunger strike in order to meet their just demands, particularly ending solitary confinement. We have great pride in national leader Ahmad Sa’adat, who is locked in the battle of open hunger strike….we confirm our full support of the prisoners’ movement strike…and we call for the widest movement on all levels to support the prisoners in their strike in the prisons of the occupation and force their demands to be accepted.” A press conference was held on Sunday evening at Wattan Media Centre in Ramallah to draw attention to Sa’adat’s health situation. Khalida Jarrar, a member of the Palestinian Legislative Council with the PFLP, said that “the prisoners on hunger strike must not be harmed. The occupation state knows very well that our people are capable of protecting and responding to dangerous threats to our prisoners and leaders.” She called on Palestinian political leaders to act immediately and rapidly to protect the prisoners, and to immediately end all forms of security cooperation with the occupation. She also called for Arab countries that have ties with the occupation state to break them immediately and expel the ambassadors of the occupation.

Jarrar said that Sa’adat was transferred without anyone’s knowledge to the prison hospital, something only discovered when a lawyer sought to visit with him at Ramon prison. She also noted particular concern for the health of the brave strikers Thaer Halahleh and Bilal Diab, who have been on hunger strike for 62 days. She noted that isolation is one of the most urgent reasons for the strike, saying that it is one of the most dangerous actions by the Prison Service against leaders, including Mahmoud Issa who has been isolated since 2002.

Abla Sa’adat, Sa’adat’s wife, said that her husband would not end its strike until its goals were achieved including ending solitary confinement and allowing family visits for prisoners from Gaza that have been prohibited for six years. Sa’adat spoke about her husband’s last message, emphasizing the need for unity to support the prisoners. She expressed serious concern for her husband’s life, noting that this is his second time on hunger strike in six months. She called for the Palestinian people and their supporters everywhere to join in events and actions in support of the prisoners, saying that such action is important to the success of the strike.

Issa Qaraqe, the Minister of Prisoners’ and Detainees’ Affairs, called for the UN General Assembly to convene a special session to take up the case of the prisoners. He noted that the Israeli government is fully responsible for the humanitarian disaster that may come to the prisoners and that the occupation state is committing crimes against prisoners through arbitrary laws and racist, unjust, cruel and inhumane treatment. He said that the strike would continue to grow in the next week, which would bring an explosion to the Palestinian streets.