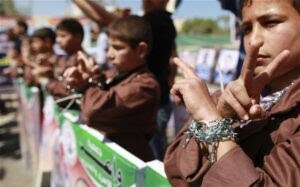 Physicians for Human Rights-Israel told CNN that there is “no recorded case” of prisoners surviving on hunger strike past 75 days without supplements or minerals, urging that Bilal Diab and Thaer Halahleh be released on their 70th day of hunger strike. The last time PHR was able to visit Diab and Halahleh, they chronicled an increasingly desperate medical situation for the two. In the meantime, the other long-term hunger strikers:

10 prisoners from Negev prison have been taken to hospital, one reporting partial paralysis due to hunger strike and medical neglect. In addition, imprisoned member of the Palestinian Legislative Council, Mohammed Jamal Natsheh, after being on an open hunger strike since 20 days, called urgently to be sent specialist doctors to see his deteriorating health condition. Natsheh’s family demanded all official, human rights and international bodies to intervene immediately in order to save the MP’s life endangered due to the strike.