About 15,000 people join march through Moscow in solidarity with anti-Putin sit-in, which is entering second week 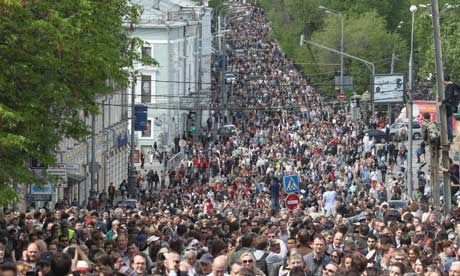 Protesters marched from Pushkin Square to the Chistye Prudy metro station in Moscow. Photograph: Sasha Mordovets/Getty Images
There's a guitar and kazoo player under a tree on a leafy Moscow boulevard, singing squeaky songs of revolution. Under another, three men gather for an impromptu game of chess, their jackets and hats adorned with the white ribbons that have become the symbol of those protesting against Vladimir Putin. A sign says a lecture on the lessons of Egypt's Tahrir Square will begin at 6pm.
For nearly a week, hundreds of Russians have camped out at Chistye Prudy, a boulevard in the centre of Moscow whose name translates as Clean Ponds. Inspired in style by the global Occupy movement, but fed in substance by the growing anger at Putin's return to power, the protest is the clearest sign yet that opposition to Russia's leader refuses to go away.

"We can't live like this any more," said Nina Panteleyeva, a 63-year-old French teacher. "Everything is falling apart – the schools don't teach, the hospitals don't heal, the courts don't deliver justice."
Panteleyeva was one of 15,000 Russians that took to the streets of Moscow on Sunday for a march in support of the camp, nicknamed Occupy Abay after the statue of a 19th-century Kazakh poet that is the anchor of the sit-in.

Yet, through it all ran a shiver of fear. "Of course we're scared," said Lena Sokolovskaya, a 40-year-old designer. "We live in such a country where at any moment we can be crushed."
After violently cracking down on protests last week during Putin's inauguration for his third term as president, riot police have been called back. They had arrested hundreds in the span of four days as protesters wandered from square to square before settling down at Chistye Prudy.

The opposition leader Alexey Navalny, who helped launch the Occupy Abay movement, remains in jail on a 15-day sentence for disobeying police. His co-hort Sergei Udaltsov, a far-left leader, is also in jail and has gone on hunger strike. Supporters worry they could face longer sentences as the Kremlin seeks to clamp down on the movement.

Putin has remained silent on the protests since his inauguration. His spokesman, Dmitry Peskov, has said riot police acted "too softly" when they violently broke up a thousands-strong protest on the eve of the event. Ilya Ponomaryov, an opposition Duma deputy, said Peskov told him the protesters should "have their livers smeared on the sidewalk for injuring riot police". Peskov has refused to deny the phrase, saying only that Ponomaryov's publicising of a private conversation was "not manly".

Anti-Putin protesters at Chistye Prudy. Photograph: Sergey Ponomarev/AP
For now, the atmosphere at Occupy Abay remains one of hippy calmness. Groups of protesters break into song. Others form a drum circle. There are teenagers and pensioners, women with children, men with white ribbons tied into their beards.

"It's a huge number of people, happy and smiling people without a drop of aggression," said Lyudmila Ulitskaya, one of Russia's best-known novelists. "I'd call it the birth of civil society, which we in Russia have always had such a hard time with."

Ulitskaya and several other writers and poets had called for Russians to join Sunday's march. Boris Akunin, a novelist and protest organiser, told the crowd: "The point of this walk is simple. We have to teach the authorities to deal with their people politely and with respect, not via sticks or the police."

Strangers struck up political discussions. Struggling poets read their work to small crowds. One man walked by and shouted into his telephone: "I've realised what Moscow wants! Not a KGB president, but a writer-president, like Vaclav Havel."

Vladimir Nikipolsky, a taxi driver and poet, said: "The intelligentsia has woken up. We can no longer live under feudalism."

As evening fell on Moscow, many of the protesters faded away, but hundreds stayed behind ready to sleep on yoga mats and wake up to the camp's second week. A white board on a platform announced events in the days to come: lectures on the workers' struggle, followed by a priest's discussion on the church's attitude towards the jailed punk band Pussy Riot.

"I have a feeling of cyclicity," said Ilya Bezrukov, head of a Moscow museum focused on Russia's many revolutions. "You see what they were demanding 100 years ago and we have the same problems today. But this protest shows we've broken the cycle of bloodletting. It's our victory not theirs."