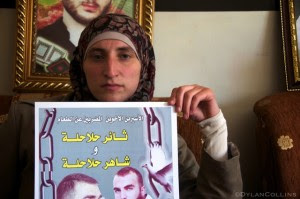 Freed prisoner Khader Adnan called out for emergency night marches and rallies in support of Bilal Diab and Thaer Halaleh, following reports that Bilal and Thaer’s health has deteriorated greatly as they enter their 63rd day of hunger strike. Jawad Boulos of the Palestinian Prisoners’ Society reported that Bilal Diab fainted suddenly today during a legal visit at the prison hospital.

Diab issued a statement, saying “We call upon all of the progressive forces of the world and all of our people who care for our national cause, and ask all human rights organizations and medical associations to urgently visit Ramle prison hospital to see with their own eyes the untold suffering around the clock. I thank all who have stood with us in the battle of the flesh and the sword…On day 63 of the hunger strike, I am aware that I am in the final phase of this battle of “biting the fingers” and that we are holding our position seriously and responsibly….I will continue the strike until freedom or martyrdom.”

Boulos also reported that Thaer Halahleh, also in Ramle prison hospital, had been kept on the hospital floor for five hours, and was cursed and threatened by the on-call physician, who wished him dead, and then briefly transfered to a hospital off-site before being returned to Ramle. Halahleh is feverish, vomiting bile and bleeding from the mouth. He called upon the United Nations to act, saying “I am in my 63rd day of hunger strike, I call on you for immediate intervention to save life in the face of the danger of imminent death at any moment. According to doctors, I am aching all over my body and have lost my immune system. Before it is too late, end continued administrative detention against me and all prisoners held without charge. This is contrary to international law, and you consider yourselves protectors and observers for their implementation, and ask states to apply the Geneva Conventions. Why do you not ask this of the occupier Israel, is this state a state above international law that is not held accountable for its crimes? Is it not your motto that human rights are most precious?”

The Prisoners Society also reported that hunger striker Muhammad Halas was moved to the prison hospital after 12 days without food, while Ahrar Centre for Prisoners Studies director Fuad al-Khafsh said, as reported by the Palestine Information Centre, that hunger striker Mohammed al-Aruri’s health is deteriorating, as he is not only on hunger strike since April 12 but also refusing medications for Thalassaemia, to protest his confinement under administrative detention. He emphasized the seriousness of al-Aruri’s medical state, saying that he must be released immediately in order to receive treatment, and called for international attention to his case. Aruri’s administrative detention was extended a third time with no charge or trial on the 5th of April, prompting his strike. He has been denied family visits and Red Cross doctor’s visits since 2011.