Verdicts in for the Genoa 10: guilty

July 15, 2012 Italy Calling
The Italian High Court confirmed on Friday 13th July the sentences for the 10 activists on trial for crimes of “devastation and looting” during the G8 summit in Genoa in 2001. While some of the sentences have been slightly reduced, all 10 activists have been declared guilty of devastation and looting crimes against private property (for a little historical insight on this charge have a look at my previous article). 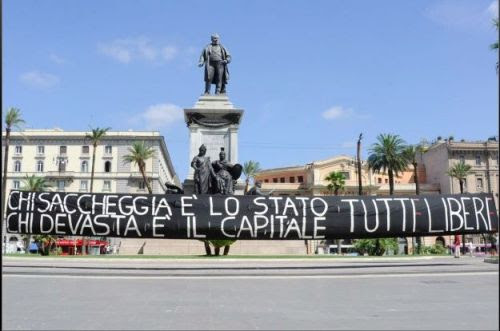 It’s the State that devastates, it’s the Capital that loots: everyone free!
Five of the defendants have been granted right to appeal against other related charges, and their cases will be re-examined by the judges. The other five have seen all appeals rejected and are going to be imprisoned within the next few days; the first, Alberto Funaro, a historical editor of the activist radio Radio Onda Rossa, entered Rebibbia prison in Rome the day after the sentence, but is likely to be transferred soon.
Once again the media and the “political world” have almost universally reacted positively to the sentences, commenting in particular on the clemency of the judges who have decided to reduce some of the sentences by a few months. According to some, justice has finally been done and there has been equal punishment for the police forces guilty of violence and brutality, and for the “violent” protesters.
Funny though: the police forces who stormed into the Diaz school battering sleeping people are still on the loose, with a slight possibility of losing their jobs, their bosses have been acquitted of all charges and promoted; in the meantime, ten people who did nothing but damage cars and shop windows and never harmed anyone are going to spend in some cases 14 years of their lives in jail. As usual, the Italian justice system clearly shows who it serves.
Elena Giuliani, Carlo’s sister, commented on the sentence: “It wasn’t enough that they judged his murder a lawful murder. After 11 years, they still had to take more lives. And they were not the lives of those who killed, tortured, battered, or the lives of those who ordered the beatings and covered them up. Once again, they took the lives of our comrades”.
In detail, here are the sentences:
Alberto Funaro, 10 years (already in jail)
Ines Morasca, 6 years and 6 months
Marina Cugnaschi, 12 years and 3 months (already in jail)
Vincenzo Vecchi, 13 years
Francesco Puglisi, 14 years
The following are out on bail and waiting for appeals on related charges:
Carlo Arculeo, 8 years
Carlo Cuccomarino, 8 years
Luca Finotti, 10 years and 9 months
Dario Ursino, 7 years
Antonino Valguarnera, 8 years
Watch this space for more detailed info and addresses to write to them.
Based on various articles published on Contropiano, for originals see here.