Video streaming by Ustream
Update (7/22): Just a heads up--everyone who was in jail has been released. Arraignments are Monday, July 23, at 9:30am in Rochester City Court. A press conference will be held outside the Hall of Justice, 99 Exchange Blvd. at 9:00am Monday, July 22nd, before the arraignment of the 18 arrestees.

A community meeting regarding the arrests, brutality, and next steps took place at the Flying Squirrel Community Space at 2pm. See some of the main points.

Update: Tonight, July 21, 2012, at around 8:00pm an anti-capitalist march was quickly and brutally stopped by the Rochester Police Department. According to the D&C, 18 people were arrested. Police put the protest at 150 people (marchers said 75) marching west bound on East Ave. in two lanes of traffic after snaking through downtown Rochester. When march goers got to East Ave. and Union, police were waiting. People moved to the sidewalk. There was no order to disperse and no violence from marchers. Once there, police snatched and arrested marchers on the sidewalk with more than one witness stating they saw police spray chemical agent, at point blank range, in the eyes of handcuffed arrestees.


Of all the preventable ways we suffer, there is one common factor fueling them.

We will gather in common cause for a world which puts human need before profit.
We have enough food, enough houses, enough water, and enough electricity that these needs could be met.

We give ourselves permission to meet those needs with a new, non-capitalist system.

Because a better world IS possible.

And we are here to fight for for it and build this world! See you in the streets!

Evan Peacock, one of the marchers, writes:


I would like to take a moment to express my displeasure with the Rochester Police Department for the unwarranted and brutal arrest of 18 protesters on fallacious charges, and would like to "cordially" invite all serving and retired members of said police force to eat a bag of dicks.


there are Rochester Police Officers who, today, maliciously and unprovoked, attacked peaceful protesters with pepper spray. It was a violent attack and many people were sprayed in the eyes at close range. This absolutely can not be tolerated. We must stop these violent thugs!!

Shane Burley, yet another marcher, writes:


Rochester Police Department today attacked a stream of peaceful protesters with chemical weapons without provocation, arresting 18 people. Many of these people were attacked, thrown on the ground, peppersprayed when in handcuffs, and done so without being asked to comply with any requests. The given reasons for this were things like swearing, wearing a mask, walking next to the sidewalk, riding their bike, and being loud.

Tim Adams, who was also there, writes:


Saw a 100 lb. woman snatched from a crowd today, cuffed behind her back, and THEN maced from point blank in the eyes. She asked the man why he was doing this. His response: "you were swearing." Despicable.


We were close to the front; there was no audible order for people to move to the sidewalk. However, we all moved onto the sidewalk before we that reached that sweet bacon-barricade (who were in fact the only people blocking traffic from that point on). There were chemical agents sprayed up and through the air over groups of peaceful citizens. These arrests of non-violent people were carried out with extreme violence including up to six officers at one time kneeling on and pepper-spraying compliant, non-resistant individuals. The only thing more disturbing than the mistrust of our paid "peace officers" was the grins on their faces while they were punching and dragging our friends away.

Currently, jail support needs around $1,200 to bail out the rest of the people that can get out tonight. Go down to the jail at 130 Plymouth Ave. and give your support.

The 18 have been charged with disorderly conduct and their arraignment is on Monday, July 23, at 9:30am in Rochester City Court. 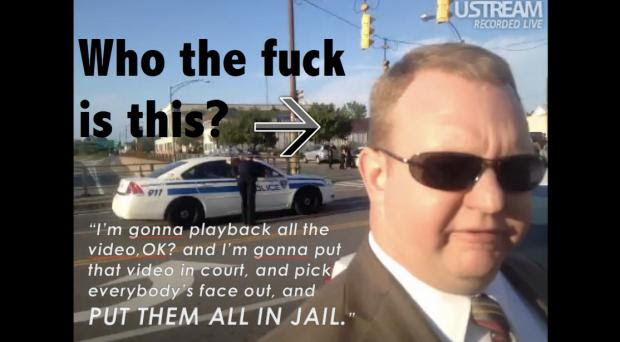 From Hamza Sinanaj (grabbed and arrested from behind with no warning):

Saturday 7/21: 15-20 arrests at the anti-capitalist march, while the march snaked through downtown.  Arrestees included protesters from Rochester, Syracuse, Binghamton, and Buffalo.  The march numbered around 75.  Arrest happened on East ave, next to the innerloop. Jail support is happening now at the Rochester Police Department at 185 Exchange Blvd.