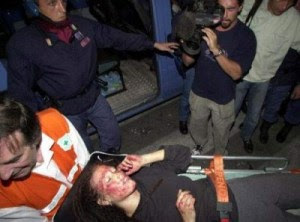 After a 9-hour debate, the Italian Supreme Court has issued its final sentence against the 25 defendants – policemen and heads of security forces – responsible for the violence against the activists sleeping in the Diaz school during the G8 summit in Genoa in 2001. Result: most of the charges have been declared time-barred, leading to impunity for all the people involved. In the meantime, 10 activists are facing a total of 100 years of jail between themselves for crimes of “devastation and looting”.
Most of the criminal offences with which officers had been charged, including those of serious bodily harm, have been declared time-barred and therefore void. Torture is not even a crime on the books of Italy’s domestic legislation, therefore officers have never been charged with it. The only charge miraculously within the statute of limitations – that of fabricating false evidence – won’t have any major consequences thanks to the prison amnesty approved in 2006 for this type of crimes.
The only measure taken against the defendants (and whether it will actually happen or not is another matter) is a disqualification from public offices for a period of 5 years, which in theory should mean the immediate removal of all officers involved from their present jobs. Curiously, though, the same sanction hasn’t been applied to the squad leaders who led the school raid: once again, it would seem because of the statute of limitations.
In the meantime, the executives who directed the whole operation have, over the years, being promoted within the police forces, the Secret Services and other State forces: for example, the infamous Gianni De Gennaro, back then head of the police, has been made under-secretary to the Council of Ministers by the present Monti government. De Gennaro was definitively acquitted of all charges since “the fact does not subsist” – that is, in legal Italian terms, there isn’t any evidence that what he’s accused of actually happened. Now, don’t go saying the Italian state doesn’t know how to reward its most loyal workers.
Heidi Giuliani, mother of Carlo Giuliani, commented that “this justice is not complete, and more people were responsible, I’m talking about the then head of the police being acquitted, and the lack of trials for my son’s death”.
Most media reacted positively to the news, stating that justice had been finally done and everyone should live happily ever after. In a little while everyone will start saying that yes, maybe a couple of cops took it too far, but that the protesters weren’t innocent either, and that maybe the violence was only an excessive but justified reaction to the protesters’ violence. You’ve heard it all before…
So, while all the state forces go back home with a pat on their backs and a “Don’t do it again, son, it’s cost me money to get you of this mess”, 10 people who were among the protesters are facing the possibility of spending a good part of their lives in jail for crimes of “devastation and looting”, a legal legacy of the Fascist regime and one of the most serious charge in terms of public order in Italy.
Based on an article published on Contropiano, original here.
Background info: Amnesty International’s report on the G8.

For the support campaign to the G8 defendants, check my previous article on the topic and spread the call-out far and wide.
For a very personal and honest account of those days read my translation of fellow blogger psikosomatica‘s article here.