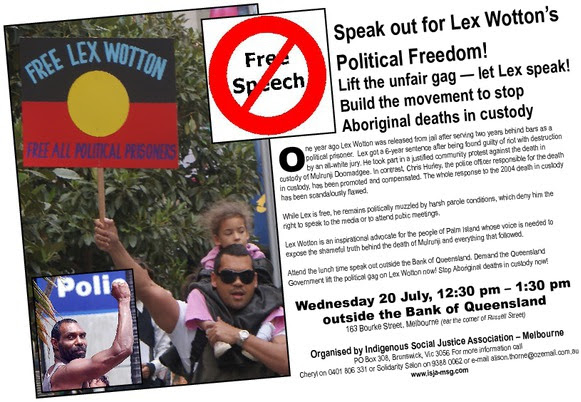 One year ago Lex Wotton was released from jail after serving two-years behind bars as a political prisoner. Lex got a 6-year sentence after being found guilty of riot with destruction by an all-white jury. He took part in a justified community protest against the death in custody of Mulrunji Do...omadgee. In contrast, Chris Hurley, the police officer responsible for the death in custody, has been promoted and compensated. The whole response to the 2004 death in custody has been scandalously flawed.

While Lex is free, he remains politically muzzled by harsh parole conditions, which deny him the right to speak to the media or to attend pubic meetings.

Lex Wotton is an inspirational advocate for the people of Palm Island whose voice is needed to expose the shameful truth behind the death of Mulrunji and everything that followed.

Attend the lunch time speak out outside the Bank of Queensland. Demand the Queensland Government lift the political gag on Lex Wotton now! Stop Aboriginal deaths in custody now!