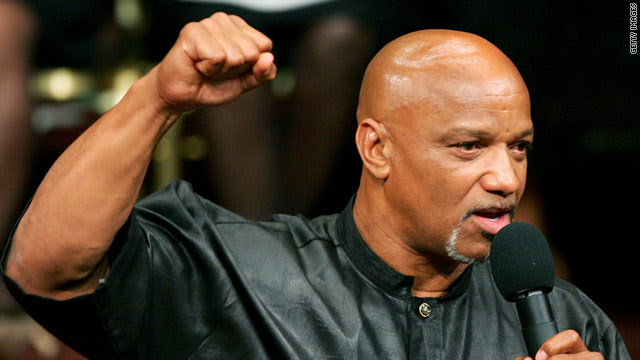 Elmer "Geronimo" Pratt spent 27 years in prison for a murder he says he didn't commit. His conviction was later overturned.

Stuart Hanlon, a San Francisco-based lawyer who helped overturn Pratt's murder conviction, said he did not know the exact cause of death.

Pratt died in a small village in Tanzania where he lived with his wife and child, Hanlon said.

Hanlon called Pratt a "true American," saying that he was an Army veteran who served two tours in Vietnam before joining the Black Panther Party.

"He could've been a great leader. He was very charismatic," Hanlon said. "His legacy is that he never gave up. He never got despondent or angry."

Pratt's conviction became a rallying cry for rights groups that said he had been framed for his strident activism during the turbulent civil rights era.

Pratt was convicted for the 1968 murder of Caroline Olsen on a Santa Monica tennis court. He spent 27 years in prison before the conviction was overturned in 1997 after a judge ruled that prosecutors had concealed evidence.

The victim's husband, wounded during the robbery attempt, originally identified another man as the killer. But the jury was not informed of that, the judge said.

Famed attorney Johnnie Cochran also helped in the legal battle to get Pratt released from prison. Pratt spoke at Cochran's funeral in 2005.

After his release, Pratt told CNN that he held no bitterness about the many years he spent behind bars.

"I don't think bitterness has a place. I'm more understanding," Pratt said in a 1999 interview. "Understanding doesn't leave any room for bitterness or anger."

Of the 27 years he spent in prison, Pratt said eight was in solitary confinement. He said his spirituality and love of music helped him through that period.

"My mantra was the blues. It would go through my head when I was going through my meditations," Pratt said.

LOS ANGELES—Elmer "Geronimo" Pratt, a former Black Panther Party leader who spent 27 years in prison on a murder conviction that was later overturned, has died. He was 63.

Pratt died at his home in a small village in Tanzania, where he had lived for at least half a decade, lawyer Stuart Hanlon, who helped Pratt win his freedom, told The Associated Press from San Francisco on Thursday.

Hanlon said he learned of Pratt's death through the former activist's family members. He did not know what caused Pratt's death, but said he had suffered from high blood pressure.

Hanlon said Pratt refused to carry any resentment about his treatment by the legal system.

"He had no anger, he had no bitterness, he had no desire for revenge. He wanted to resume his life and have children," he said. "He would never look back."

Pratt was convicted in 1972 of being one of two men who robbed and fatally shot schoolteacher Caroline Olsen on a Santa Monica tennis court in December 1968. No one else was arrested.

Pratt claimed he was in Oakland for Black Panther meetings the day of the murder, and that FBI agents and police hid and possibly destroyed wiretap evidence that would prove it.

His lawyers, who included high-profile defense attorney Johnnie Cochran, blamed his arrest on a politically charged campaign by J. Edgar Hoover's FBI against the Black Panthers and other perceived enemies of the U.S. government.

Pratt's belated reversal of fortune came with the disclosure that a key prosecution witness hid the fact he was an ex-felon and a police informant.

Superior Court Judge Everett Dickey granted him a new trial in June 1997, saying the credibility of prosecution witness Julius Butler—who testified that Pratt had confessed to him—could have been undermined if the jury had known of his relationship with law enforcement. He was freed later that month.

Prosecutors announced two years after the conviction was overturned that they would abandon efforts to retry him.

"I feel relieved that the L.A. DA's office has finally come to their senses in this respect," Pratt said at the time. "But, I am not relieved in that they did not come clean all the way in exposing their complicity with this frame-up, this 27-year trauma."

He settled a false imprisonment and civil rights lawsuit against the FBI and city of Los Angeles for $4.5 million in 2000.