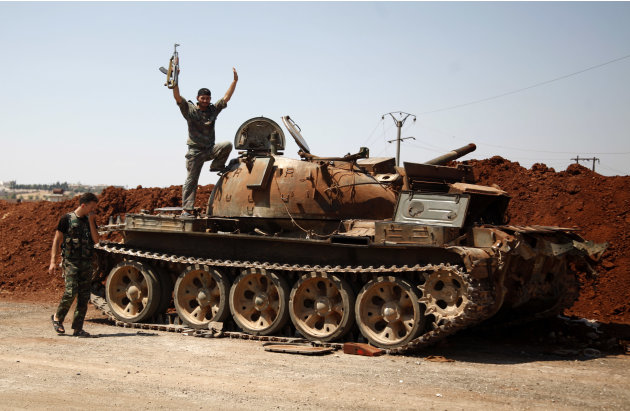 ALEPPO, Syria (Reuters) - Syrian forces stormed the last rebel stronghold
in the capital Damascus in tanks and armored vehicles on Friday and
blasted artillery at rebels in Aleppo, where the United Nations said the
army was preparing a massive assault.

The violence came within hours of former United Nations Secretary-General
Kofi Annan quitting as international peace envoy for Syria, underlining
the impotence of mediation efforts in the 17-month-old uprising against
President Bashar al-Assad.

A senior U.N. official said a long-expected army onslaught to take Aleppo,
Syria's largest city and economic hub, was imminent following a buildup of
army reinforcements. The fighting in Aleppo has focused on the Salaheddine
district, seen as a gateway to the city for the Syrian army.

Rebels poured into Aleppo in July after being largely driven from the
capital, Damascus, where they had launched an offensive that coincided
with a bomb blast that killed four top security officials. The fighting in
Syria's two main cities has intensified the conflict over the past three
weeks.

Other rebels said heavy fighting was taking place in Saleheddine, the main
battleground district, where they estimated 20 civilians had been killed.
They say 50 of their fighters have been killed there in the last several
days.

U.N. Secretary-General Ban Ki-moon said "acts of brutality" reported in
Aleppo could be crimes against humanity. Both sides have accused each
other of carrying out summary executions of prisoners in the city.

U.N. member states voted overwhelmingly to condemn the Syrian government
at a special session of the 193-nation General Assembly that Western
diplomats said highlighted the isolation of Assad supporters Russia and
China.

Russia's U.N. Ambassador Vitaly Churkin blasted the Saudi-drafted
resolution, which condemned Damascus and called for a political
transition, as "harmful" and said it "hides blatant support for the armed
opposition." Russia and China were among the 12 nations that voted against
the text, which received 133 yes votes and 31 abstentions.

In the capital, Syrian troops entered Damascus's southern district of
Tadamon with dozens of tanks and armored vehicles in a push to win back
the last rebel stronghold there, a witness and activists said.

Activists said most of the district was under the control of government
forces by early Friday evening. The army had been trying to enter Tadamon
for more than a week but was pushed back by fierce resistance from the
rebels.

An activist said the troops had executed several people after entering the
district. The account could not be confirmed.

"Thousands of soldiers have entered the neighborhood, they are conducting
house-to-house raids," a resident, who did not want to be identified for
security reasons, said by telephone.

The fighting spread to Aleppo from Damascus after the bomb attack on
Assad's security headquarters in the capital on July 18, which killed four
of the president's senior aides and encouraged rebels to step up
hostilities.

The Syrian army has reinforced its positions in and around Aleppo over the
past two weeks, while conducting daily artillery and aerial bombardments
of rebel forces in the city.

"The focus two weeks ago was on Damascus. The focus is now on Aleppo,
where there has been a considerable buildup of military means, and where
we have reason to believe that the main battle is about to start," Herve
Ladsous, the Under-Secretary-General for Peacekeeping Operations, said in
New York.

Annan resigned on Thursday, complaining of "finger-pointing" at the United
Nations while the bloodshed in Syria went on. His mission, centered on a
peace plan and a ceasefire that never took hold, had looked increasingly
futile amid escalating violence.

In an article published on the Financial Times website, Annan said Russia,
China and Iran "must take concerted efforts to persuade Syria's leadership
to change course and embrace a political transition." [ID:nR4E8D400Y]

"It is clear that President Bashar al-Assad must leave office," Annan said.

However, in a sign that Russia is not yet ready to abandon support for its
ally, Moscow hosted a Syrian oil official and promised to send gasoline in
return for crude that Syria is having difficulty selling because of
sanctions.

"We are ready to deliver all of our oil and receive what we need in
gasoline and diesel," Qadri Jamil, Syria's deputy prime minister for
economic affairs, told journalists in Moscow.

At the United Nations, the 193-nation General Assembly approved a
Saudi-drafted resolution that expressed "grave concern" at the escalation
of violence in Syria, with 133 votes in favor, 12 against and 31
abstentions. Russia and China were among those opposed.

The resolution has the assembly "deploring the failure of the Security
Council to agree on measures to ensure the compliance of Syrian
authorities with its decisions."

Syrian Ambassador Bashar Ja'afari complained that the meeting was "another
piece of theatre," adding that the "resolution will have no impact
whatsoever."

Aleppo, with its 2.5 million inhabitants, is a prize that could determine
the outcome of a war the Syrian opposition says has already cost 18,000
lives.

Internet and telephone networks in Aleppo were mostly cut for the third
day, hampering attempts by rebels to coordinate and forcing them to use
couriers to deliver orders. Soldiers were launching rockets at insurgents
from an infantry school north of Aleppo.

Areas around the city are divided, with some villages loyal to Assad and
others favoring the opposition. Police and soldiers were setting up mobile
checkpoints on some main roads leading into the city from the north.

There are increasing signs of quarrelling among rebel factions and between
fighters and the population.

"The Free Syrian Army is causing us headaches now," said Abu Ahmed, a
local official who works with journalists in the Syrian town of Azaz, near
the Turkish border.

"If they don't like the actions of a person they tie him up, beat him and
arrest him. Personality differences between brigade members are being
settled using kidnappings and force. They are self-righteous and we are
not happy about it," he told Reuters.

Elsewhere in the country, opposition activists said Syrian forces had
killed at least 50 people during clashes with rebels in the central city
of Hama on Thursday, while a helicopter bombardment killed 16 rebels near
the southern town of Deraa.

In Damascus, at least 20 people were killed on Thursday when security
forces fired three mortar rounds at a Palestinian camp that is home to
100,000 refugees, medical sources said. Palestinian leaders in the West
Bank and Gaza condemned the attack.