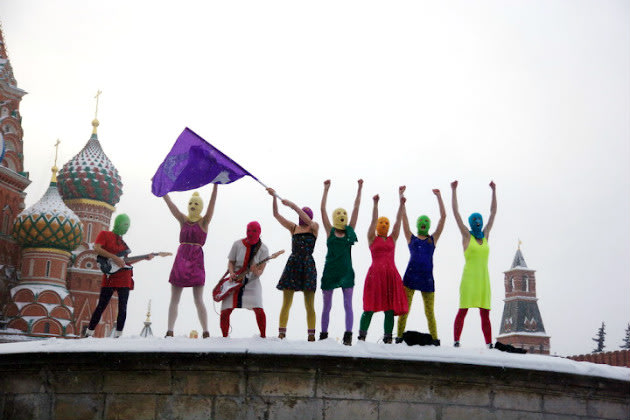 Three members of Pussy Riot--a Russian punk band and feminist collective that mocked Russian president Vladamir Putin during a "punk prayer" in a Moscow cathedral--have been found guilty of  hooliganism and sentenced to two years in jail.

Judge Marina Syrova announced the verdict from a district court in central Moscow, about two miles from the Christ the Saviour Cathedral where the guerrilla group performed its "flash" stunt.
"The girls' actions were sacrilegious, blasphemous and broke the church's rules," Syrova said.
The band members--Nadezhda Tolokonnikova, 22, Maria Alyokhina, 24, and Yekaterina Samutsevich, 30--were arrested on March 3, several weeks after the performance, and charged with "hooliganism." They've been in jail ever since.

The trio sat behind a class-walled cage inside the courtroom and laughed as the verdict was read. Prosecutors had sought a three-year sentence.

Supporters outside the courthouse chanted "Shame!" as news of the verdict spread.

"They are in jail because it is Putin's personal revenge," Alexei Navalny, one of them, told Reuters. "This verdict was written by Vladimir Putin."

The trial drew enormous international interest, sparking catcalls from international free-speech advocates and spawning dozens of protests. There were several impromptu protests in Moscow, London, Paris, Barcelona and elsewhere on Friday, and numerous reports of arrests.

Madonna, Bjork, Paul McCartney and Courtney Love were among a long list of musicians to come out in support of Pussy Riot, calling on the Russian government to set the band members free. Last week in Berlin, more than 400 people joined a protest led by electro-singer Peaches.

"In one of the most extravagant displays," the Associated Press said, "Reykjavik Mayor Jon Gnarr rode through the streets of the Icelandic capital in a Gay Pride parade ... dressed like a band member--wearing a bright pink dress and matching balaclava--while lip-synching to one of Pussy Riot's songs."


What started as "a punk-infused political prank," London's Independent said, "has rapidly snowballed into one of the most notorious court cases in post-Soviet Russian history."

Five members of the group, which formed in 2011, were arrested in January after a video of a Putin-baiting performance in Moscow's Red Square circulated online. They were detained for several hours by police, fined and released, NPR said.

Pussy Riot's stunt at Moscow's Christ the Savior Cathedral, a Russian Orthodox church, was a response, they said, to Patriarch Kirill's public support of Putin in the build-up to Russia's presidential election. Putin won a third term as president in March.

The Guardian called the trial, which began on July 30, "worse than Soviet era."

"By the end of the first week of Pussy Riot's trial," the Guardian's Miriam Elder wrote last week, "everyone in the shabby Moscow courthouse was tired. Guards, armed with submachine guns, grabbed journalists and threw them out of the room at will. The judge, perched in front of a shabby Russian flag, refused to look at the defense. And the police dog--a 100 [pound] black Rottweiler--no longer sat in the corner she had occupied since the start of Russia's trial of the year, but barked and foamed at the mouth as if she were in search of blood."


Lawyers for the women complained during the trial that the trio were being starved and tortured in prison. Two threatened to go on a hunger strike after they were initially jailed.

"Their treatment has caused deep disquiet among many Russians, who feel the women are--to coin a phrase from the 1967 trial of members of the Rolling Stones--butterflies being broken on a wheel," the BBC's Daniel Sandford wrote.


Syrova was subjected to unspecified threats during the trial, Russian authorities announced on Thursday--assigning bodyguards to protect her before and after she announced the verdict.
Several Russian pop stars, though, questioned the outpouring of support for Pussy Riot.
"What is so great about Pussy Riot that all these international stars support them?" Russian singer Valeria wrote on her website, according to Reuters. "They must be saying this because someone ordered them to."

"Art and politics are inseparable for us," the band said in an interview with the online newspaper Gazeta.ru in February. "We try to make political art. Performances and their rehearsals are our job. Life in Pussy Riot takes a lot of time."