MANAMA, Bahrain (AP) — A three-year prison sentence handed down Thursday to a prominent Bahraini human rights activist for instigating and participating in several anti-government rallies prompted rare criticism from the United States and sparked clashes in the streets of the Gulf nation's capital. 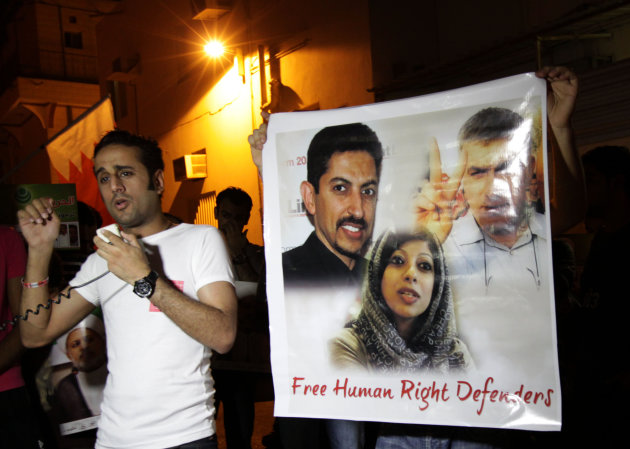 The unexpectedly harsh sentence against Nabeel Rajab is also likely to raise questions about the Western-backed Sunni monarchy's commitment to reform, and embolden anti-government protesters who have been demonstrating for the past 18 months, calling for greater rights in this Gulf island kingdom that is home to the U.S. Navy's 5th fleet.

The monarchy considers most anti-government rallies as "illegal gatherings" punishable by law.

Rajab, who is already serving a three-month sentence for posting anti-government comments on Twitter, was in court for the verdict. He is the president of the Bahrain Center for Human Rights.
The State Department said it was "deeply troubled" by the verdict, while the European Union "noted with concern" the sentence. Rights groups, including Amnesty International and Human Rights Watch, also condemned the verdict.

"We've long made clear that it's critical for all governments, including Bahrain, to respect freedom of expression, freedom of assembly," State Department spokeswoman Victoria Nuland said. "So we are deeply troubled by the sentencing today. We believe that all people have a fundamental freedom to participate in civil acts of peaceful disobedience, and we call on the government of Bahrain to take steps to build confidence across Bahraini society and to begin a really meaningful dialogue with the political opposition and civil society because actions like this sentencing today only serve to further divide Bahraini society."

Rajab's attorney Mohammed al-Jishi said his client was sentenced to a year in prison for each of three protests he took part in, bringing the total sentence to three years. Al-Jishi said he plans to appeal the ruling.


"What happened today in the court room shows clearly there is no justice or independent judiciary," said Rajab's wife Sumayia, who was also in court with her son and daughter. "My husband is not a criminal but a hostage of a government which can't stand freedom of expression and freedom of assembly."

Prosecutors defended the ruling, contending that Rajab urged his followers to confront security forces, which in turn led to riots across the Bahraini capital, Manama — contradicting Najab's and his supporters claims that he was calling for peaceful protests.

"The Public Prosecution produced evidence that the accused had called in public speeches for a demonstration to confront public security personnel, inciting violence and escalation against law enforcement officers, resulting in deaths during those confrontations," Prosecutor Mohamed Hazza said.

In a separate case involving comments made on social media site Twitter, a judge delayed issuing a verdict against Rajab's appeal until Aug. 23.

Bahrain has experienced near-daily protests since February 2011, following an uprising by the kingdom's Shiite majority seeking greater political rights from the Western-backed Sunni monarchy. At least 50 people have died in the unrest and hundreds have been detained, including prominent rights activists and Shiite opposition leaders.

Shiites account for about 70 percent of Bahrain's population of just over half a million people, but claim they face widespread discrimination and lack opportunities granted to the Sunni minority. The country's leaders have offered some reforms including restoring jobs for many Shiites pushed out from their posts at the start of the uprising and giving parliament more power.

But the opposition says they fall short of Shiite demands for a greater voice in the country's affairs and an elected government.

The unrest has put Washington into an awkward position. U.S. officials have called for efforts to reopen political dialogue in Bahrain, but are careful not to press too hard against the nation's leadership and possibly jeopardize their important military ties.

Rights groups said the verdict raises questions over whether the regime is serious about reforms. The groups have called for his immediate release.

"It seems Bahrain's rulers are far more comfortable with harsh repression than with the reforms King Hamad keeps promising," said Joe Stork, deputy director of Human Rights Watch's Middle East and North Africa division. "The government has yet to show that Nabeel Rajab did any more than exercise his right to free expression and peaceful assembly. He should be set free, not sent away from his family to prison."


Brian Dooley of the U.S.-based Human Rights First agreed. "Even those of us who have followed Bahrain's violent crackdown on human rights are shocked by today's move," he said. "It's a breathtakingly bad decision, showing that the regime's rhetoric about reform and reconciliation is a sham. The charges are patently politically-motivated, and designed to silence him."

The Shiite majority's main political bloc, Al-Wefaq, also criticized the verdict, saying the continued detention of activist and political leaders shows the regime is not interested in solving the crisis.
"By not releasing the political detainees, including key figures and leaders, the regime is refusing the political solution to the crisis and is practicing an irresponsible obstinacy," it said in a statement.
"There should be no political detainees behind bars," it continued. "They are prisoners of conscience and the regime has no right to continue to hold them as hostages as part of its security solution to the ongoing political crisis. The arrogant adoption of security measures is more destructive to society."
Late Thursday, security was tight across Manama including around the U.S. Embassy and other diplomatic compounds. Protesters burned tires on several main roadways and clashes between riot police and protesters were reported in some Shiite neighborhoods.