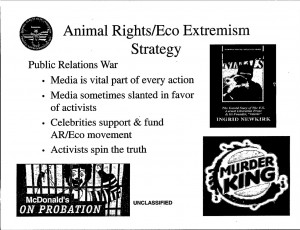 Among the more troubling portions of the training materials are warnings of activists using the Freedom of Information Act, engaging in non-violent civil disobedience, and gathering in coffee shops.


The domestic terrorism training materials were obtained through the Freedom of Information Act by the ACLU. They offer additional insight into a disturbing pattern of FBI activity misrepresenting political activists as “terrorists” and manufacturing “domestic terrorism threats” where none exist, akin to the notorious COINTELPRO program of J. Edgar Hoover.


Anarchists Are “Criminals Seeking an Ideology”

In presentations on “Anarchist Extremism,” the FBI warns: Anarchists are also “paranoid / security conscious,” according to the presentation. This is an interesting observation coming from the FBI, considering there have been two recent cases where the FBI played a key role in infiltrating anarchist groups in order to orchestrate alleged terrorist attacks. In the Cleveland May Day arrests, and in the Chicago NATO arrests, the FBI trumpeted the arrest of “terrorists” that agents themselves tried desperately to create.

However, not all anarchists are engaged in these types of plots, the FBI acknowledges. They use a “variety of tactics” including “civil disobedience” (such as resisting home foreclosures, creating community gardens, and many other activities not mentioned by the bureau).

The FBI also warns that anarchists may have “crossover ideologies” including animal rights extremism and environmental extremism.

In the training presentation on these so-called “eco-terrorists,” the FBI lists lawful, First Amendment activity and low-level criminal activity (such as civil disobedience) as examples of domestic terrorism.

The FBI is particularly focused in these presentations on information gathering and what it calls a “public relations war” by activist groups. “Media is sometimes slanted in favor of activists,” the FBI says. “Activists spin the truth.”

Examples of information gathering listed by the FBI include requests for public documents under the Freedom of Information Act. In one presentation, FOIA requests are listed as examples of “University targeting.”

The FBI also warns of activist attempts to use “false employment.” This is undoubtedly related to activists who seek employment at factory farms and vivisection labs in order to expose animal welfare abuses. As I have reported here previously, the FBI has considered terrorism charges for non-violent undercover investigators. And multiple states have been seeking to criminalize undercover investigations as well.

As I document in Green Is the New Red, there has been a slow and relentless expansion of “terrorism” rhetoric and investigations over the last 30 years. This type of language and FBI investigation was initially confined to property crimes by the Animal Liberation Front and Earth Liberation Front (groups that have caused millions of dollars in economic loss, but have never harmed a human being).

Now this already-broad terrorism classification has been expanded even further.  The Animal Enterprise Terrorism Act was drafted to target anyone who causes the “loss of profits” of an animal enterprise. The FBI acknowledges this shift in “terrorism” investigations in a slide that says the new law “alleviates the use of force or violence criteria.”

The ACLU’s Mike German has an excellent dissection of the FBI’s “black separatist” documents. German writes:


Who are “Black Separatists” and is there any evidence they pose a terrorist threat?
Internet searches of “Black Separatist terrorism,” “Black Separatist bombing,” and “Black Separatist shooting” fail to bring up any recent incidents that could be fairly described as terrorist violence. No “Black Separatist” terrorist incidents are included in the FBI’s list of “Major Terrorism Cases: Past and Present,” nor on the more comprehensive list of terrorist attacks going back to 1980, which are detailed in an FBI report entitled “Terrorism 2002-2005.” While Black nationalist groups like the Black Panthers and the Black Liberation Army were certainly involved in political violence back in the 1970s, they no longer exist, and the last acts of violence attributed to either group were more than two decades ago.

So why are Atlanta FBI agents now searching for black separatist threats?   Because the FBI appears to be training them to believe there is one using factually flawed materials. 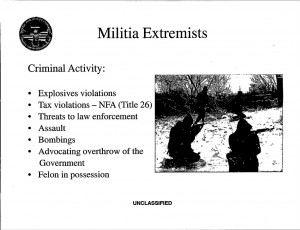 The FBI is targeting “black separatists,” anarchists, animal rights activists, and environmentalists in nearly identical methodologies. And these new documents show just how little these tactics change over time and between movements.

The FBI is manufacturing these “terrorism threats” through what I would call a process of conflation. Disparate groups are being conflated, across ideological and tactical divides, and presented as a united “threat.” For instance, the FBI notes that “black separatists” are a movement that “consists of multiple groups” lacking a unified ideology, but they are lumped together because they “all share racial grievances against the U.S., most seek restitution, or governance base [sic] on religious identity or social principals [sic].”

Just as the FBI invented a new class of domestic terrorists in 2009 called “American Islamic Extremists,” the FBI long ago embraced a new class of domestic terrorists called “eco-terrorists.” A wide range of groups, from the Humane Society to the Animal Liberation Front, have been conflated into this catch-all term. This use of language is essential to the demonization of entire social movements because it aides in reshaping them as an “other.” They are not individuals with specific political grievances, they become a mass of unreasonable extremist threats.

At the same time, the FBI is conflating a wide range of tactics. People who support anarchists or “black separatists” in their words are conflated with the very small group of people who have engaged in illegal activity. That’s how the FBI is including FOIA requests and civil disobedience as example tactics in a domestic terrorism presentation. Juxtapose this with the tactics of militia extremists and white supremacists, who have murdered, lynched, bombed, assaulted government officials and created weapons of mass destruction.

To most reasonable people, such a stark disparity between these groups would raise questions about how the FBI is allocating its domestic terrorism resources. How did such misguided policies come about?

These presentations point to one possible answer to that question: The FBI creates terrorism threats by directly training agents to believe they exist.