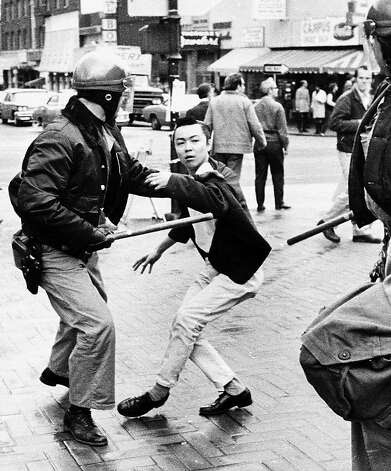 The man who gave the Black Panther Party some of its first firearms and weapons training - which preceded fatal shootouts with Oakland police in the turbulent 1960s - was an undercover FBI informer, according to a former bureau agent and an FBI report.

One of the Bay Area's most prominent radical activists of the era, Richard Masato Aoki was known as a fierce militant who touted his street-fighting abilities. He was a member of several radical groups before joining and arming the Panthers, whose members received international notoriety for brandishing weapons during patrols of the Oakland police and a protest at the state Capitol.
Aoki went on to work for 25 years as a teacher, counselor and administrator at the Peralta Community College District, and after his suicide in 2009, he was revered as a fearless radical.
But unbeknownst to his fellow activists, Aoki had served as an FBI intelligence informant, covertly filing reports on a wide range of Bay Area political groups, according to the bureau agent who recruited him.

That agent, Burney Threadgill Jr., recalled that he approached Aoki in the late 1950s, about the time Aoki was graduating from Berkeley High School. He asked Aoki if he would join left-wing groups and report to the FBI.

"He was my informant. I developed him," Threadgill said in an interview. "He was one of the best sources we had."

The former agent said he asked Aoki how he felt about the Soviet Union, and the young man replied that he had no interest in communism.

"I said, 'Well, why don't you just go to some of the meetings and tell me who's there and what they talked about?' Very pleasant little guy. He always wore dark glasses," Threadgill recalled.

Aoki's work for the FBI, which has never been reported, was uncovered and verified during research for the book by this reporter, "Subversives: The FBI's War on Student Radicals, and Reagan's Rise to Power." The book, based on research spanning three decades, will be published Tuesday by Farrar, Straus and Giroux.

In 2007, two years before he committed suicide, Aoki was asked in a tape-recorded interview for the book if he had been an FBI informant. Aoki's first response was a long silence. He then replied, " 'Oh,' is all I can say."

Asked if this reporter was mistaken that Aoki had been an informant, Aoki said, "I think you are," but added: "People change. It is complex. Layer upon layer."

The FBI later released records about Aoki in response to a federal Freedom of Information Act request made by this reporter. A Nov. 16, 1967, intelligence report on the Black Panthers lists Aoki as an "informant" with the code number "T-2."

An FBI spokesman declined to comment on Aoki, citing litigation seeking additional records about him under the Freedom of Information Act.

Since Aoki shot himself at his Berkeley home after a long illness, his legend has grown. In a 2009 feature-length documentary film, "Aoki," and a 2012 biography, "Samurai Among Panthers," he is portrayed as a militant radical leader. Neither mentions that he had worked with the FBI.
Harvey Dong, who was a fellow activist and close friend, said last week that he had never heard that Aoki was an informant.

"It's definitely something that is shocking to hear," said Dong, who was the executor of Aoki's estate. "I mean, that's a big surprise to me."

Threadgill recalled that he first approached Aoki after a bureau wiretap on the home phone of Saul and Billie Wachter, local members of the Communist Party, picked up Aoki talking to Berkeley High classmate Doug Wachter.

At first, Aoki gathered information about the Communist Party, Threadgill said. But Aoki soon focused on the Socialist Workers Party and its youth affiliate, the Young Socialist Alliance, which also were targets of an intensive FBI domestic security investigation.

By spring 1962, Aoki had been elected to the Berkeley Young Socialist Alliance's executive council, FBI records show. That December, he became a member of the Oakland-Berkeley branch of the Socialist Workers Party, where he served as the representative to Bay Area civil rights groups. He also was on the steering committee of the Committee to Uphold the Right to Travel, which worked to give students the right to travel to Cuba. In 1965, Aoki joined the Vietnam Day Committee, an influential antiwar group based in Berkeley, and worked on its international committee as liaison to foreign antiwar activists.

All along, Aoki met regularly with his FBI handler. Aoki also filed reports by phone, Threadgill said.
"I'd call him and say, 'When do you want to get together?' " Threadgill recalled. "I'd say, 'I'll meet you on the street corner at so-and-so and so on.' I would park a couple of blocks away and get out and go and sit down and talk to him."

Threadgill worked with Aoki through mid-1965, when he moved to another FBI office and turned Aoki over to a fellow agent.

Aoki gave the Panthers some of their first guns. As Black Panther Party co-founder Bobby Seale recalled in his memoir, "Seize the Time," the group approached Aoki, "a Third World brother we knew, a Japanese radical cat. He had guns ... .357 Magnums, 22's, 9mm's, what have you."
In early 1967, Aoki joined the Black Panther Party and gave them more guns, Seale wrote. Aoki also gave Panther recruits weapons training, he said in the 2007 interview.

Although carrying weapons was legal at the time, there is little doubt their presence contributed to fatal confrontations between the Panthers and the police.

On Oct. 28, 1967, Black Panthers co-founder Huey Newton was in a shootout that wounded Oakland Officer Herbert Heanes and killed Officer John Frey. On April 6, 1968, Eldridge Cleaver and five other Panthers were involved in a firefight with Oakland police. Cleaver and two officers were wounded, and Panther Bobby Hutton was killed.

M. Wesley Swearingen, a retired FBI agent who has criticized unlawful bureau surveillance activities under Director J. Edgar Hoover, reviewed some of the FBI's records. He concluded in a sworn declaration that Aoki had been an informant.

"I believe that Aoki was an informant," said Swearingen, who served in the FBI from 1951 to 1977 and worked on a squad that investigated the Panthers.