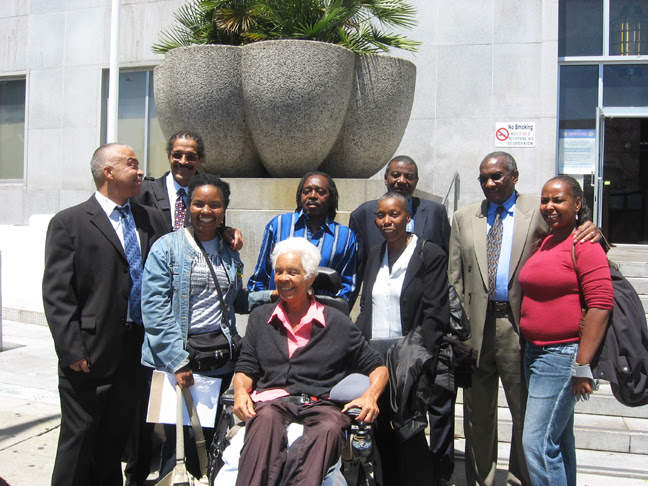 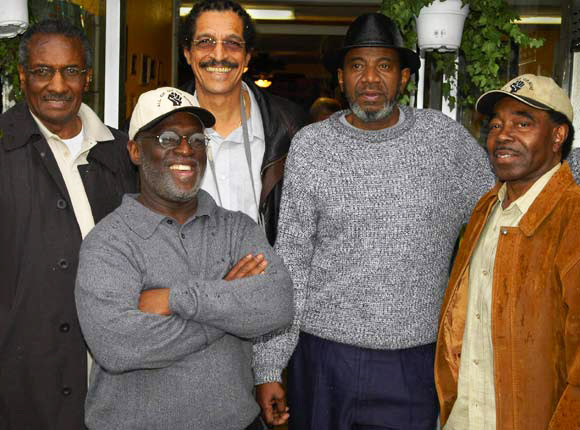 First, I would like to thank all my friends and supporters for their tenacious and tireless work in support of the SF 8, especially the San Francisco 8 Support Committee, Committee in Defense of Human Rights, Asian-Americans for the S.F. 8, Freedom Archives, and many others. I wish to thank the excellent legal team whose unwavering commitment to the task was inspiring. I especially want to thank the lawyers who did the majority of the behind-the-scenes legwork by name: Soffiyah Elijah, Jenny Kang, Julie de Almeida, Heather Hardwick, Rai Sue Sussman, and Lori Flowers. This team of women suffering the testosterone of as many as ten male lead attorneys, plus the eight men accused, truly had their feminist code tested. Naturally, I want to thank the most noted private investigators, Adam Raskin and Nancy Pemberton, whose investigative technique and services were outstanding.

Today we were to start the preliminary hearing but because of our strong legal defense team and growing public support, the California prosecutor offered plea settlements that could not be ignored. The entire group discussed whether I would plead no contest to conspiracy to manslaughter. After some discussion, I reluctantly agreed to take the plea and be sentenced to 3 years probation; 1 year of jail time, credit for time served, concurrent with New York State sentence, dismissing 1st degree murder and conspiracy to commit murder. Also, because of my plea, four other defendants would have all charges dismissed for insufficient evidence. This was a no-brainer especially considering the elder brothers suffered a variety of health issues ranging from high blood pressure, chronic respiratory problems, diabetes, PTSD, and prostate cancer. Although I have my own health issues, in my near 38 years of imprisonment, I believe I am in better shape than all four combined (Ha).

In the last 25 years prior to these charges being lodged, the brothers had been living peaceful and productive lives raising their families, and offering community services. During the period from their release on bail to this date, they had been running themselves ragged across the country telling the story of Cointelpro destruction of the Black Panther Party, the Legacy of Torture, and building support for the case. While I would have liked to have continued the legal fight to what I believe would have resulted in complete exoneration of all charges, I know the jury system is fickle. I have seen too many innocent men in prison who fought with the conviction of being innocent after a reasonable plea bargain was offered, and they ultimately lost due to prosecutorial misconduct, defense attorney errors, improper jury instructions by a judge, and/or a fickle jury. Unfortunately, their loss results in spending decades in prison fighting for a reversal or waiting to be released on parole, or in the worst cases, death row DNA exonerations. The American judicial system is nowhere near being without flaws, as the overwhelming number of Black men in prison sorely attests. Given these circumstances, my taking this plea is a bitter-sweet win-win.

Finally, I would like to thank with profound appreciation my attorneys Daro Inouye, a 30+ year veteran of the San Francisco Public Defender's Office, whose trial experiences and skills are incomparable; and Mark Goldrosen, a remarkable, selfless trial technician and writer whose understanding of both State and Federal law brought the court (and some of the attorneys) to task.

Finally, after years of unified resistance by the brothers and a the building of massive support, California State prosecutors were forced to admit that they have insufficient evidence against the San Francisco 8.

Charges against four of the defendants were dropped and Jalil Muntaqim pled no contest to conspiracy to commit voluntary manslaughter. The State prosecutor asked the court to sentence him to 12 months calling it "a drop in the bucket." Judge Moscone replied "unless you're the one doing the time." Jalil received credit for time served (close to 2 1/2 years in County Jail) and 3 years probation. He will return to New York to fight for parole.

The courtroom at 850 Bryant Street was packed with SF 8 supporters after a rally of hundreds and a huge "Free SF 8" banner was displayed on the hillside of Bernal Heights to be seen from all over the city.

"This is finally the disposition of a case that should never have been brought in the first place," announced attorney Soffiyah Elijah.

Francisco Torres still faces a court hearing on August 10. Francisco steadfastly maintains his innocence according to his attorney Charles Bourdon who intends to file a motion to dismiss the charges against his client.

Herman Bell entered a plea a week ago – see post below.
Posted by SF8 Webster at 1:52 PM 0 comments

Herman Bell was supported by a courtroom of supporters today as he entered a plea in the SF 8 case. After legal formalities he left the courtroom raising a clenched fist to the crowd. The following statement was issued by his legal team:

Herman Bell was supported by a courtroom of supporters June 29th as he entered a plea in the SF 8 case. After legal formalities he left the courtroom raising a clenched fist to the crowd.

Herman Bell pled guilty to the reduced charge of voluntary manslaughter for his role in the killing of San Francisco police officer John Young in 1971.

Part of the plea agreement is that Herman will not be a witness against his comrades and friends and cannot be called to any hearing as a witness by the prosecution.

His sentence is that he will be placed on informal probation for five years and will be allowed to immediately return to New York. He will receive absolutely no additional prison time for his actions.

Herman and his co-defendants have always maintained that because of the torture used by the New Orleans Police Department to gain alleged confessions and the lack of new evidence, these charges should never have been brought.

Your strong showing of support at my plea/sentencing hearing this past Monday was truly heartening. For me, removing the possibility of going to trial when a proposal (though unpalatable) is offered that would leave open a future chance at parole in another jurisdiction was something I could not pass up. So I accepted the AG’s proposal. There is no disunity here, just a tactical legal decision having been made. I could never be at peace with myself if I sat in a prison cell for the rest of my days knowing that I rejected a proposal that left open possible freedom one day. You expect me to think and act responsibly and to make responsible decisions. I expect no less of myself or of you.

I am so proud of you and all the work you’ve done in our behalf and in waking our movement from its lethargy proud of your speaking, proud of your fund-raising, proud of your organizing (the Labor Council, the City Supervisors, the Caravan to Sacramento such a sweet piece of “main stream” organizing, and the tribute to Panther women). So very proud that you were in court to smile your greetings whenever we appeared; proud that you made bail for those of us who could bail-out, and that you routinely visited those of us who could not. I shall miss your frequent visits, so how could I not go forward in this without a heavy heart. I do so thanking you for being true to yourselves and thanking you for the love and righteous support you gave and are giving the SF8.

I love you all.

INCARCERATING PEOPLE "FOR PROFIT" IS IN A WORD....WRONG!
Even if one does not ask or pretends not to see the rope and the flashing red flag draped around the philosophical question standing solemnly at attention in the middle of the room, it remains apparent that the mere presence of a private “for profit” driven prison business in our country undermines the U.S Constitution and subsequently the credibility of the American criminal justice system. In fact, until all private prisons in America have been abolished and outlawed, “the promise” of fairness and justice at every level of this country’s judicial system will remain unattainable. We must restore the principles and the vacant promise of our judicial system. Our government cannot continue to "job-out" its obligation and neglect its duty to the individuals confined in the correctional and rehabilitation facilities throughout this nation, nor can it ignore the will of the people that it was designed to serve and protect. There is urgent need for the good people of this country to emerge from the shadows of indifference, apathy, cynicism, fear, and those other dark places that we migrate to when we are overwhelmed by frustration and the loss of hope.
My hope is that you will support the National Public Service Council to Abolish Private Prisons (NPSCTAPP) with a show of solidarity by signing "The Single Voice Petition"
http://www.petitiononline.com/gufree2/petition.html