While friends of the three men insisted they were just operating a home
brewery, prosecutors stated that police found a gun that fires mortar
rounds, swords, a hunting bow, ninja-like throwing stars and knives with
brass knuckle handles. The beer-brewing operation, prosecutors added, was
used to fill bottles with gasoline that would later be thrown as Molotov
cocktails.

"Plans were made to destroy police cars and attack four CPD stations with
destructive devices, in an effort to undermine the police response" to
attacks on the Obama office and the Emanuel home as well as unspecified
financial institutions, the charging statement said.

The three were being held on charges of conspiracy to commit terrorism,
possession of an explosive or incendiary device and providing material
support for terrorism.

Mike Barrett, CEO of Diligent Innovations Consulting and former director
of strategy for the Bush administration's Homeland Security Council, talks
the G8 summit being held at Camp David, and the upcoming NATO Summit
kicking off in Chicago this weekend where Occupy Wall Street protesters
are already waiting.

Defense attorneys told a judge on Saturday that undercover police were the
ones who brought the Molotov cocktails, and that their clients were
entrapped.

Bond of $1.5 million was set for each defendant.

Michael Deutsch, one of their attorneys, later told reporters outside the
courtroom that it was all a setup. Two informants "ingratiated themselves"
with the three men and "this was all their idea," he insisted.

It was "entrapment to the highest degree," Deutsch said.

But Chicago Police Supt. Garry McCarthy told reporters "the evidence
speaks for itself" about what he called an "imminent threat."

"They were making the bombs ... (and had) directions on how to implement
this," added Cook County State’s Attorney Anita Alvarez.

Six others initially arrested have been released. They were all detained
in a raid Wednesday on a home in Bridgeport on Chicago's South Side,
NBCChicago.com reported.

Beer or bombs?
But the group of protesters said what police thought was suspicious was
actually a home beer-brewing operation.

“We were handcuffed to a bench and our legs were shackled together. We
were not told what was happening,” one of those detained but later
released, Darrin Ammussek, told NBCChicago.com.

“I believe very strongly in non-violence, and if I had seen anything that
even resembled any plans or anything like that, we wouldn’t have been
there," he added.

He claimed that during 18 hours in custody, police never told him why he
was arrested, read him his rights or allowed him to make a phone call, The
Associated Press reported. He said he remained handcuffed to a bench, even
after asking to use a restroom.

"There were guards walking by making statements into the door along the
lines of 'hippie,' 'communist,' 'pinko,'" a tired-looking Ammussek told
reporters just after his release.

Security has been high throughout the city in preparation for the summit,
where delegations from about 60 countries, including 50 heads of state,
will discuss the war in Afghanistan and European missile defense.

Among the pre-NATO protests planned for Saturday was a march on the home
of Mayor Emanuel. The big show will be on Sunday, the start of the two-day
NATO summit, when thousands of protesters are expected to march 2½ miles
from a band shell on Lake Michigan to the McCormick Place convention
center, where delegates will be meeting. 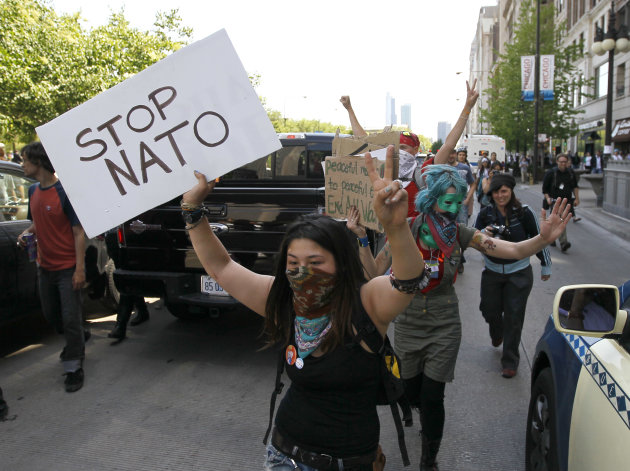 3 men charged with terror conspiracy ahead of NATO

By SHANNON MCFARLAND and TAMMY WEBBER | Associated Press – May 19, 2012

CHICAGO (AP) — Three men arrested earlier this week when police raided a
Chicago apartment were being held Saturday on terrorism conspiracy
charges, accused of trying to make Molotov cocktails ahead of the NATO
summit.

Their attorney, Sarah Gelsomino, said the men are "absolutely in shock and
have no idea where these charges are coming from."

They were scheduled to be in court later Saturday for a bond hearing on
charges of conspiracy to commit terrorism, possession of an explosive or
incendiary device and providing material support for terrorism.

Six others arrested Wednesday in the South Side raid were released Friday
without being charged.

Among the items seized by federal authorities was beer-making equipment,
Gelsomino said.

Chicago police Lt. Kenneth Stoppa declined to elaborate on the case beyond
confirming the charges against the three who were still in custody.

Police identified the men being held as Brian Church, 20, of Ft.
Lauderdale, Fla.; Jared Chase, 24, of Keene, N.H.; and Brent Vincent
Betterly, 24. A police spokesman gave Betterly's hometown as Oakland Park,
Mass., but no such town exists. There is an Oakland Park, Fla., that is
near Fort Lauderdale.

The three came to Chicago in late April to take part in May Day protests,
said activist Bill Vassilakis, who said he let them stay in his apartment.

He said Betterly was an industrial electrician and had volunteered to help
wire service at The Plant, a former meatpacking facility that has been
turned into a food incubator with the city's backing.

Vassilakis said he thought the charges were unwarranted.

"All I can say about that is, if you knew Brent, you would find that to be
the most ridiculous thing you've ever heard. He was the most stand-up guy
that was staying with me. He and the other guys had done nothing but
volunteer their time and energy," he said."

Authorities in Oakland Park, Fla., said Betterly and two other young men
walked into a public high school last fall after a night of tequila
drinking and took a swim in the pool, according to a report in the South
Florida Sun-Sentinel.

They stole fire extinguishers from three school buses, discharged one and
smashed a cafeteria window with another. The vandalism caused about $2,000
in damage, the newspaper said.

Betterly was charged with burglary, theft and criminal mischief.

Security has been high throughout the city in preparation for the summit,
where delegations from about 60 countries will discuss the war in
Afghanistan and European missile defense.

Elsewhere, Chicago was mostly quiet. Downtown streets were largely empty,
though that is not unusual for a weekend. Security guards stood watch
outside many downtown buildings. In places, the guards almost outnumbered
pedestrians.

Outside the Chicago Board of Trade, a frequent target of Occupy
protesters, a lone protester wore a sign about wasteful military spending.

Closer to the summit site, commuter rail service was halted for a short
time so police could investigate a suspicious package on a train running
beneath the convention center where diplomats will be meeting.
Investigators determined there was no threat.

Among the pre-NATO protests planned for Saturday was a march on the home
of Mayor Rahm Emanuel.

The bigger show will be on Sunday, the start of the two-day NATO summit,
when thousands of protesters are expected to march 2½ miles from a band
shell on Lake Michigan to the McCormick Place convention center, where
delegates will be meeting.

On Friday, police on bicycles and foot tailed activists through the
streets but ignored taunts and went out of their way to make as few
arrests as possible. Protesters made a lot of noise and tried to evade
police, but otherwise were relatively uneventful.

In all, police said there was a single arrest on a charge of aggravated
battery of a police officer. Another man was briefly taken into custody,
but he was released a short time later after being questioned by police, a
department spokesman said.

Michael Olstewski, a recent music school graduate who came to Chicago from
Atlanta, was one of hundreds of protesters who took to the streets Friday
for a spontaneous march. He said he would not rule out provoking police to
arrest him later "if I feel it's strategic and a powerful statement."