While it is possible that he was “recruited” right out of high school when he was “200 percent American,” this remains only an allegation in my opinion. Besides, what are the specific impacts or consequences of Richard’s alleged reports to the FBI? None are mentioned that are tied specifically to Richard. 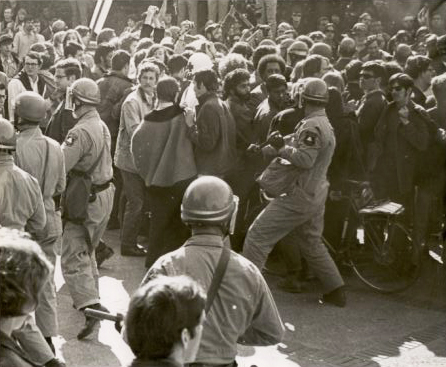 As much as authorities fear militant Blacks, they fear multi-racial solidarity even more – witness last year’s California prison hunger strikes. Here, Third World Liberation Front (TWLF) strikers’ picket line is being pushed by police at Sather Gate, UC Berkeley, in 1969. – Photo: Stand Up Archives, courtesy of Bea Dong
I was stunned by the allegations that Richard was an FBI agent. I never saw any signs of it since I started running with him in 1968. That said, I would be inclined to give Richard the benefit of the doubt. One’s life should be judged by its totality, not by short periods nor by a few of the mistakes we human beings inevitably make along life’s journey.

Why do I feel like me and my peeps just got yellow periled and willie hortoned? By a white dude in a suit? Why is fanning racial fear to sell product still called “yellow” not “white” journalism?

Cowardice in journalism triumphs when an experienced reporter uses insufficient evidence to accuse a movement leader of being an FBI informer betraying the Black Panther Party and others – after the brother is dead and the crows and worms have already done their work. It’s a shameful day when the reporter detonates this bomb in multiple media outlets as the first-day publicity launch for his book – even though the accused, Richard Aoki, and his movements are but a sideline in a book about Ronald Reagan, the FBI, Mario Savio, the Free Speech Movement and Clark Kerr. Sorry, Ronny, J. Edgar, Mario and Clark. Y’all white guys will never be as sexy as “sneaky japs” and “negroes with guns.” Remember Executive Order 9066. Remember COINTELPRO. Remember the Maine, William Randolph Hearst and “yellow” journalism.

Cowardice in journalism triumphs when an experienced reporter uses insufficient evidence to accuse a movement leader of being an FBI informer betraying the Black Panther Party and others – after the brother is dead and the crows and worms have already done their work.

It’s a sorry day when a reporter employs the Great White Hunter (GWH) school of hype, luring prey into the lair, building trust and then springing the gotcha! trap, as his cameraman zooms in on his prey’s distress. That’s what GWH did to our bro Harvey Dong for Rosenfeld’s Center for Investigative Reporting video blast, “The Man Who Armed the Panthers.” 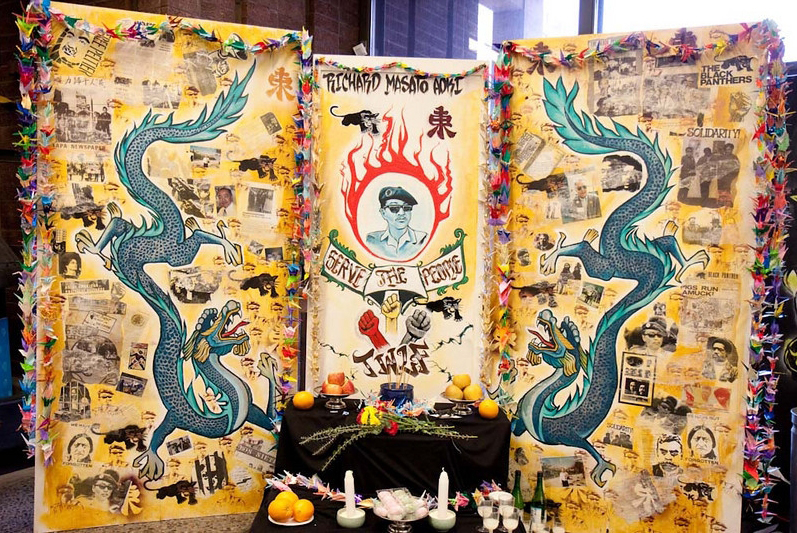 At Richard Aoki’s memorial on May 2, 2009, was this stunning tableau of his life – the main message written in the center: “Serve the People.” In front were placed candles, rice and sake for folks to come pay their respects. – Photo: Andre Nguyen, www.takenbyandre.com
Did GWH tell Richard’s cousin, family minister, filmmakers and sisters and bros in the Third World Liberation Front and Black Panther Party that he was interviewing them to lend authenticity to his planned exposé alleging that Richard was an informer? As courtesies a reporter might extend to survivors of internment camps, FBI persecution and police violence? Did GWH inform the caretakers of the Harvey Dong, Richard Aoki and Ethnic Studies UCB archives of his purpose in using their materials, motherlodes created to tell our stories in our own words, without white voiceovers?

Richard was my Asian Studies 198 instructor on Third World Liberation Movements during Fall 1969. Before we met, he had urged Belvin (my “paramour” in FBI parlance) to take up leadership in the Asian American Political Alliance and the Third World Liberation Front’s Central Committee. Sure Richard was a vet and gun nut of NRA proportions, but his provocations to our movement were intellectual. His memorial yielded a thicket of troublemakers, a testament to the generations of critical thinkers he helped instigate. Lord knows he was no angel. And who can predict what information may emerge in the future. But to Belvin and me, Richard deserves a fair hearing because he served time when the U.S. government railroaded him and his family into a concentration camp for the “crime” of being Japanese and because he spent adult life motivating and educating youth. 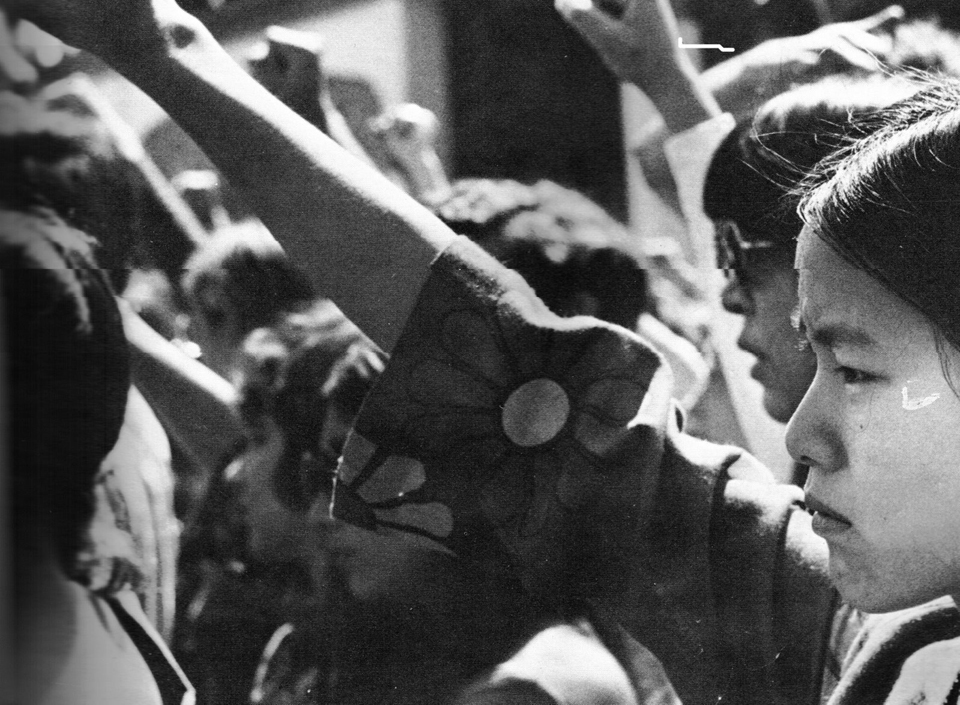 Oakland High School students with the Asian American Movement were as outraged as his comrades in the Black Panther Party when Lil Bobby Hutton, 16, was murdered by Oakland police April 6, 1968, two days after the assassination of Dr. King. Bea Dong is in front. – Photo: aam1968.blogspot.com
Any allegations against him merit careful investigation and analysis. Not the savaging of his memory and tooling of his family, friends and community to sell product. Not the retraumatizing of those who have already suffered FBI harassment and whose families, friends, neighbors and employers were interrogated because of our activism and, in some cases, because they were immigrants. As is now being perpetrated against our Arab, South Asian and Muslim sisters and brothers.

What gives Seth Rosenfeld the impression that he can play, plunder and dishonor us like this? Irrespective of what comes out about Richard in the future, I believe Rosenfeld owes Richard’s family, friends and community, especially the Black Panther Party and Third World Liberation Front strikers, a public apology for the sensationalist and racially exploitative way he conducted his investigation and book promotion in relation to Richard and our movements.


Any allegations against him merit careful investigation and analysis. Not the savaging of his memory and tooling of his family, friends and community to sell product.

And while dealing with my rage and sense of betrayal, I also struggle to hold a mirror to myself and my fellow writers of color. Let this painful episode be a lesson for us as well. May we be scrupulous in our assessments and work with people. May we not pander to prejudice, no matter how popular. May we write hard truths without twisting conclusions to fill our pockets and egos.